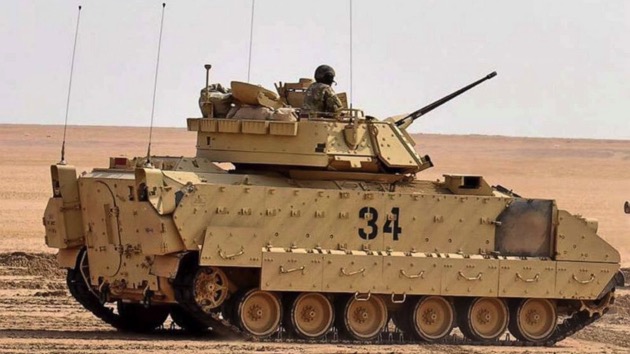 US Department of Defense(WASHINGTON) — U.S. armored vehicles and infantry troops have arrived in eastern Syria as part of a new deployment to defend oil facilities from falling into the hands of the Islamic State, according to the U.S. military, a move that reflects the Trump administration’s back-and-forth Syria policy.As many as 500 American troops could be part of the new force announced just three weeks after President Donald Trump ordered the withdrawal of the 1,000 U.S. troops in northeastern Syria, saying, “It’s time to come back home.”The arrival of the new forces plus the decision to keep 200 troops at a base in southern Syria means that the troop withdrawal will result in 700 American forces remaining in Syria.In effect, the hurried withdrawal and subsequent decision to protect oil facilities from ISIS will result in the swap of different units as lightly armed special operations units are replaced by conventional units with more firepower.In a tweet on Thursday, the spokesperson for the U.S.-led anti-ISIS coalition in Iraq posted images showing soldiers with the National Guard’s 30th Armored Brigade Combat Team loading M2A2 Bradley Fighting Vehicles in support of the coalition’s mission in Deir ez Zor, Syria. Those forces will continue partnering with America’s Kurdish allies “to defeat ISIS remnants, protect critical infrastructure, and deny ISIS access to revenue sources,” said Col. Myles Caggins.The unit, which consists of National Guard soldiers from North and South Carolina, arrived in Kuwait last week before re-positioning some of its infantry and Bradley Fighting Vehicles into eastern Syria near the oil fields.Hundreds of U.S. military personnel have been located near those oil fields since 2017 when they were retaken from ISIS by America’s Kurdish partners. The new forces will reinforce the troops already there and provide more firepower than what they currently have.The U.S. troops who are in the process of leaving northeast Syria will remain in Iraq before going back to the U.S. or re-deploying elsewhere in the region.Shortly after the decision to withdraw the 1,000 U.S. forces in Syria, President Trump decided to maintain “a small footprint” of forces in southern Syria at the At Tanf Garrison “to continue to disrupt remnants of ISIS”. But U.S. officials have said the real reason to maintain the troop presence there is to deter Iranian arms shipments through the key highway that runs past the garrison, linking Iran to the Mediterranean.There are already close to 200 U.S. troops at that location meaning that at least 700 American service members will continue to be located in Syria despite the president’s declaration that the U.S. is “getting out.”On Monday, Chairman of the Joint Chiefs of Staff Gen. Mark Milley said that U.S. troops would protect the Conoco oil fields, located just east of Deir ez Zor along the Euphrates River. Defense Secretary Mark Esper said that deployment would continue until the U.S. has “sufficient capability to ensure ISIS and other destabilizing actors are denied access to that oil facility.”But the president has taken that mission a step further, saying the U.S. will be “keeping the oil” — an assertion that has prompted renewed cries that doing so is a war crime.The Pentagon has only said the U.S. will guard the oil from falling into the wrong hands. Still, Esper said American forces retain the right to self defense and will “respond with overwhelming military force against any group who threatens the safety of our forces there,” to include Syrian troops or their Russian and Iranian backers.Copyright © 2019, ABC Audio. All rights reserved.