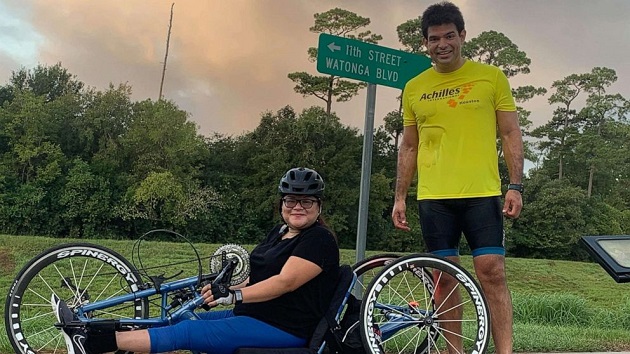 Courtesy Gloria Suarez(NEW YORK) — Gloria Suarez, of Houston, was at the finish line when her best friend, Juan Sorto, finished his first marathon nearly five years ago.One month after cheering on Sorto, Suarez, 36, was paralyzed from the waist down during surgery to remove a tumor in her spine. On Sunday, the two friends will race the 2019 New York City Marathon together, Suarez in her wheelchair and Sorto running right beside her.”Every single day I wake up and I can’t believe that we’re living in this moment,” Sorto, 34, told ABC News’ Good Morning America. “All the things that Gloria has experienced and to look back and see all the things she has overcome, I don’t even have words to describe it.””It is possible to do anything you put your mind to,” said Suarez. “Even if you have to modify things, the biggest thing is that it can be accomplished.”Suarez was just 30 and a single mom to an 8-year-old daughter in late 2014 when doctors discovered the tumor on her spine after she landed in the emergency room doubled over in pain.A surgery in February 2015 to remove the tumor became life-altering for Suarez when she developed a spinal hematoma during the surgery that left her paralyzed from the waist down. She spent the next several months hospitalized and underwent intensive rehabilitation to recover and learn to live as a paraplegic.”Doctors told me I’d be in the hospital for one week and then I’d go home. I told my job I’d be back working in one week,” she said. “Obviously that did not happen.””I had about five surgeries during the time I was in the hospital,” Suarez added. “And every year since I’ve had at least one surgery because of complications.”By her side during her medical crisis was Sorto, her best friend since the pair met as students at the University of Houston more than a decade ago.”Still to this day, one of the most difficult things for me to do is ask for help,” said Suarez. “I remember Juan asking me for a grocery list and I would not give him a list and he went anyway and bought groceries for me and my daughter and kept doing it.”Sorto, a Ph.D. student at Texas Southern University, credits Suarez with giving him the motivation to keep running and transform his lifestyle.”I hadn’t really put all the effort into running until this happened with Gloria,” he said. “I thought, ‘There’s no reason I should give up.’ I was in a way channeling her experience and it was motivating me to keep going forward.”Sorto has since lost around 60 pounds and completed 13 marathons and an Ironman triathlon.While he trained, Sorto said he worried that Suarez — who eventually had to quit her job and had to have her mom live with her and her daughter for a period of time — would “give up on herself.”Two years ago, he connected Suarez with the Houston chapter of a group, Achilles International, that helps people disabilities participate in running races and other sports.”Juan brought this group into my life at the lowest point that I was feeling,” said Suarez. “When I had my injury I gained so much weight because it’s difficult to be in a wheelchair and not be able to walk or do the things I want to do.””I’ve since lost about 60 pounds and I’ve done things with this group that I didn’t even think was possible even if I could walk, like horseback riding, kayaking, rock climbing and skydiving,” she said.Suarez also began to train in wheelchair racing with Sorto, who would run beside her.The pair planned to run the Houston Marathon last year but had to drop out when Suarez required another surgery.They picked up their training after her surgery and now plan to race the New York City Marathon together, a physical accomplishment that even Suarez’s doctor said he cannot believe.”It’s a feat that most people wouldn’t be able to appreciate,” Dr. Argyrios Stampas of TIRR Memorial Hermann in Houston said of racing 26.2 miles in a wheelchair. “Your arm muscles are not meant to be doing a repetitive motion like that like your legs are.””And when you have paralysis your whole body chemistry changes and metabolism changes so you don’t have the endurance or capacity for this type of exercise that you would if you didn’t have paralysis,” he said, noting that he remembers Suarez being in so much pain after her initial surgeries that her medical team could barely even touch her.”It is so impressive to me to see how far she’s come,” Stampas added. “Through it all she’s always been very positive and just trying to get as much out of her life as possible and be as independent as possible.”While Suarez says her daughter, Jazmin, now 13, has been her biggest inspiration to keep going, Suarez keeps inspiring other people.Jazmin serves as her mom’s Achilles guide for 10k and 5k races and plans to join her school’s track team to train to be a guide for marathons and half-marathons, according to Suarez.Sorto’s sister was inspired by Suarez to start running and has since lost 40 pounds. She plans to run the 5k race before Sunday’s marathon and will be one of nearly 12 members of Suarez’s and Sorto’s cheering squad in New York City.”It’s a circle of hope,” Sorto said. “It’s one thing to change your own lifestyle but another thing to be able to motivate others. It’s beyond remarkable.”Suarez said she can’t believe her life today. She is making her first-ever visit to New York City to race the city’s legendary marathon and she said she wakes up every day excited to work out.”Even though we might suffer a traumatic experience, life goes on and anything is possible,” Suarez said, adding that she still doesn’t see herself as an inspiration. “This is my life and this is something I’ve had to learn to adapt to and am continuing to learn to adapt to.” Copyright © 2019, ABC Audio. All rights reserved.