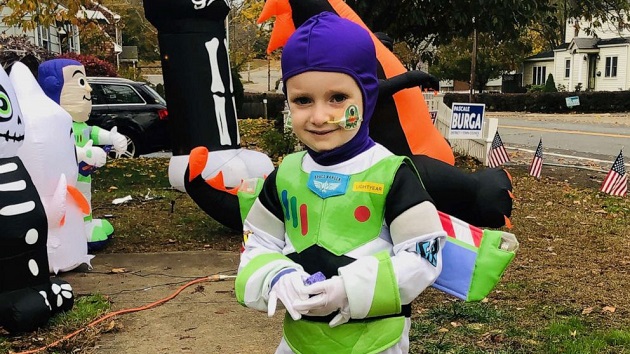 Jarlath Waters(WEYMOUTH, Mass.) — On the day after Quinn Waters turned 3 years old in February this year, he was diagnosed with brain cancer. The toddler spent five months in and out of the hospital and endured close to 10 hours of surgery, four rounds of chemotherapy and a stem cell transplant. All of the treatment left him with a weakened immune system so that when he was finally released from the hospital at the end of June, Quinn could not leave his home in Weymouth, Massachusetts.Quinn spent 100 days in isolation. His only connection to the outside world was his front window.On Thursday, however, he was outside — cancer-free and dressed in his Toy Story Buzz Lightyear costume — trick-or-treating with his family and friends. It was a very special moment during a special week for the Waters family.While Quinn was isolated in his house, his community stepped in, entertaining their beloved “Mighty Quinn.” Neighbors showed up to do tricks, a high school theater troop and cheerleaders performed and there were even Irish step dancers. Quinn greeted them all from his perch inside what his family termed the “Quinndow.”Even the Red Sox World Series trophy was brought by for Quinn to see.For the first time since his treatment started, Quinn was allowed to venture outside his home in late September. On Tuesday, the “Mighty Quinn” appeared at TD Garden in Boston as part of Hockey Fights Cancer Night to drop the puck before the Bruins hockey game against the San Jose Sharks.Before the ceremonial drop, his father Jarlath Waters, said that watching the Bruins play in the Stanley Cup playoffs had helped him and Quinn get through some rough chemotherapy treatments.”We watched every game,” Waters said Tuesday. “The Bruins got us through some rough nights, just me and him. … This is like a very special, healthy moment for us. … This is our first night out as a family so it’s pretty special.”On Thursday — Halloween — the Waters family were together celebrating the holiday on the outside. Quinn has no new evidence of cancer, according to his family.The “Mighty Quinn” — or Buzz Lightyear — was finally having his moment to return his neighbors’ kindness and grace to their own doorsteps with a boisterous “Trick or treat!”Copyright © 2019, ABC Audio. All rights reserved.