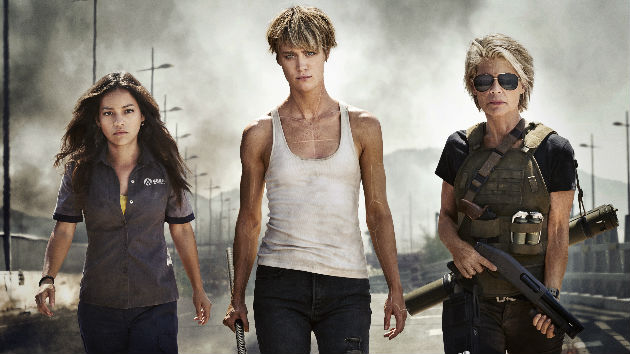 * Terminator: Dark Fate — This sixth installment in the Terminator franchise and sequel to Terminator 2: Judgement Day, reunites original stars Arnold Schwarzenegger and Linda Hamilton for the first time since producer/director James Cameron’s 1991 blockbuster.  The new film, produced and co-written by Cameron and directed by Deadpool’s Tim Miller, mirrors 1984’s original The Terminator: a human-robot hybrid, played by Mackenzie Davis, is sent from the future to protect a young woman in the present, played by Natalia Reyes, from a new, more advanced terminator, played by Agents of S.H.I.E.L.D.’s Diego Luna.  Rated R.

* Harriet — Cynthia Erivo plays the titular character in this biopic based on the life of abolitionist Harriet Tubman, who escaped slavery and led hundreds of enslaved people to freedom on the Underground Railroad.  Leslie Odom Jr., Joe Alwyn, and Janelle Monáe co-star.  Rated PG-13.

* Arctic Dogs — This computer-animated comedy-adventure stars Jeremy Renner as Swifty the Arctic Fox — a mailroom worker at the Arctic Blast Delivery Service whose quest to prove he can be Top Dog.  The Arctic’s star husky couriers leads him on a journey to a secret location, where he meets the evil Otto Von Walrus, voiced by John Cleese.  Swifty enlists his friends — played by Alec Baldwin, James Franco, Heidi Klum, Omar Sy and Anjelica Huston to foil his plot to melt the Arctic and become the world’s supreme ruler.  Rated PG.

Opening in limited release on Friday:

* Inside Game — This film is based on the true story of the man behind one of the biggest scandals in sports history — Tim Donaghy, a professional basketball referee who allegedly bet on games he worked in 2006 and 2007 and made calls affecting the point spread in those games.  Eric Mabius and Will Sasso star.  Rated R.