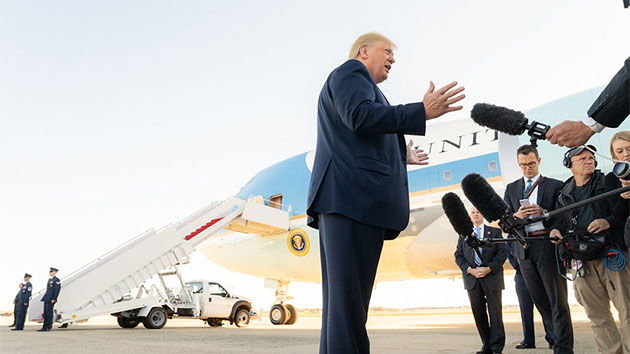 Official White House Photo by Shealah Craighead(WASHINGTON) — President Donald Trump is heading to Mississippi Friday night to rally support ahead of a surprisingly close gubernatorial election, briefly escaping Washington, where the House just sanctioned an already fast-moving impeachment inquiry. Hundreds of attendees lined up outside the BancorpSouth Arena ahead of the rally in Tupelo, Miss., days before the state heads to the polls to pick the next governor.With impeachment looming, Trump is expected to urge supporters in the deep-red state to fend off Democrats from capturing a governor’s seat held by Republicans 24 of the past 28 years.”The Greatest Witch Hunt In American History!” Trump tweeted moments after a divided House voted to endorse the Democratic-led impeachment inquiry.But Friday night is posed to focus on the Mississippi race.”Tate is strong on Crime, tough on Illegal Immigration, and will protect your Second Amendment,” Trump tweeted last week, throwing his weight behind Republican Lieutenant Governor Tate Reeves. “He loves our Military and supports our Vets!”The surprisingly tight gubernatorial race in Mississippi between Reeves and Democratic Attorney General Jim Hood likely will be decided on Tuesday.In the Magnolia State, Trump toppled Democratic rival Hillary Clinton by nearly 18 points in 2016, and Republicans have controlled the governor’s mansion for since 1992, except when Democrat Ronnie Musgrove served from 2000 and 2004.Reeves has sought to link Hood to the Democratic establishment in Washington, casting him as “just another Democrat” who stands in complete opposition to the president.”I believe that we must stand up to the liberals who are doing great damage to this country. Jim Hood is with them. He is totally against President Trump and conservative policies. He’s just another Democrat,” Tate Reeves said in a statement for a new ad.Meanwhile, Hood, the only Democrat to be elected state-wide in recent years after winning four attorneys general races, has been accused of creating divisions within his own party for refusing to publicly support down-ballot Democrats.”When I ran for district attorney in 1995, my dad gave me some good advice,” Hood said at a debate with Reeves last month, according to the Associated Press. “He said, ‘Son, you run your race and you stay out of everybody else’s.’ And I have done that, and that’s been good, sage advice for me, and I’m going to continue to do that.””I run my race because it’s going to be hard enough for me to win in this state. And I want to make sure that I represent Republicans and Democrats — because a lot of Republicans are going to vote for me,” he continued.Further complicating the close race is a Jim Crow-era law that outlines a two-step process for electing a governor in which a candidate must win the majority of the popular vote and carry a majority of the 122 state House districts. If neither candidate clearly wins both, the House votes for the winner unbound to how districts voted.A federal judge ruled Friday that the court would not prevent the state’s unique electoral vote rule from being used in the upcoming election, but expressed “grave concern” that the rule is unconstitutional — leaving the door open for further consideration of the case should the outcome of the election be determined that way.Copyright © 2019, ABC Audio. All rights reserved.