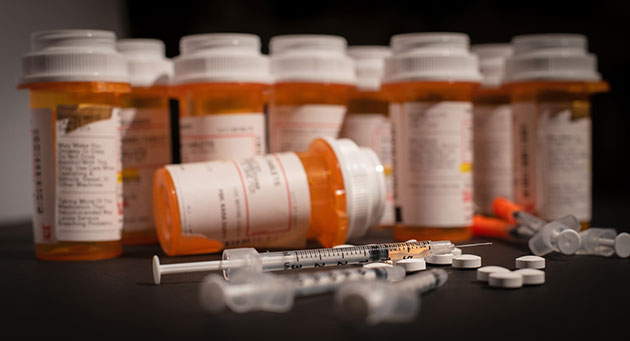 iStock(NEW YORK) — The Drug Enforcement Administration issued a warning on Monday about counterfeit prescription pills, saying the pills are “killing Americans.””Mexican drug cartels are manufacturing mass quantities of counterfeit prescription pills containing fentanyl,” according to a press release from the DEA.Twenty-seven percent of counterfeit pills seized by the DEA contain “potentially lethal doses of fentanyl,” according to the government agency.“Capitalizing on the opioid epidemic and prescription drug abuse in the United States, drug trafficking organizations are now sending counterfeit pills made with fentanyl in bulk to the United States for distribution,” said DEA Acting Administrator Uttam Dhillon in a statement. “Counterfeit pills that contain fentanyl and fentanyl-laced heroin are responsible for thousands of opioid-related deaths in the United States each year.”Deadly fake prescription pills have become a by-product of the nation’s opioid epidemic. Fake pills look almost identical to oxycodone pills, Jill Head, supervisory chemist at the DEA, told ABC News.Head said there is typically 30 milligrams of oxycodone in a pill. But the fake pills have no oxycodone in them, only high amounts of fentanyl.“Fentanyl is about 50 times more potent than heroin,” said Head. “Two milligrams of fentanyl is what’s considered a lethal dose for about 95% of the population.Black market 30 mg oxycodone pills can sell on the street for up to $30 per pill, according to the DEA.In August, authorities seized nearly a half-million counterfeit pills at a storefront in New Jersey, estimated to have been a $2.3 million counterfeit drug operation.There were over 28,000 deaths involving synthetic opioids in 2017, according to the Centers for Disease Control and Prevention. States with the highest death rates from synthetic opioids include West Virginia, Ohio and New Hampshire with males aged 25-44 having the highest death rates from synthetic opioids.The CDC said the pills are often mixed with heroin or cocaine without the user’s awareness.Copyright © 2019, ABC Radio. All rights reserved.

Officials warn about candy-lookalike ‘rainbow’ fentanyl ahead of Halloween