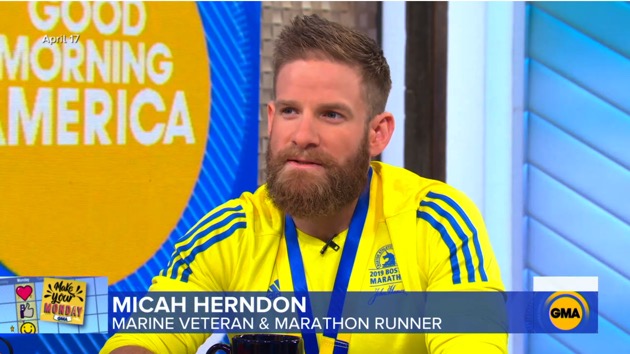 ABC News(NEW YORK) — A U.S. Marine veteran who crawled to the finish of the Boston Marathon stood tall at the end of the New York City Marathon on Sunday.Micah Herndon, who battled cramps and pain to honor his three fallen friends in April, called completing those 26.2 miles in the Big Apple the achievement of a lifetime.”It was a combination of feelings. Really the past seven months just been day in day out living and training and just trying to give my best performance yesterday,” Even though his Boston finish of 3 hours and 38 minutes did not qualify him for New York, GMA and the race organizers surprised him with a spot.In New York, he bested his Boston time by 33 minutes. The Ohio native finished his fourth marathon through all five boroughs in 3 hours and 5 minutes.”Really a combination of things — blood, sweat and tears, we just had a little baby girl, so that’s taking up some time,” Herndon, 32, said about what went into reaching this milestone.Herndon was deployed to Iraq in 2008 and Afghanistan in 2009 as a lead machine-gunner in the “Lava Dogs” division — the 1st Battalion, 3rd Marines, based out of Hawaii – Ohio’s Record-Courier reported in a pre-race profile.Running became “therapy” for Herndon after he struggled to reintegrate into civilian life following his tours, he told ABC this spring, and it is a way for him to cope with post-traumatic stress disorder and survivor’s guilt.”To honor them, because they’re not here anymore and they can’t run anymore,” he said. “Just to honor their names and their family that’s still here.”He told GMA that he said his friends’ last names aloud, Ballard, Hamer and Juarez, to keep himself motivated while running. Herndon also has special tags on his running shoe laces that have the last names of his friends.GMA made Herndon’s Monday, along with other marathon finishers, by surprising them with a massage session and gift certificate for gear.