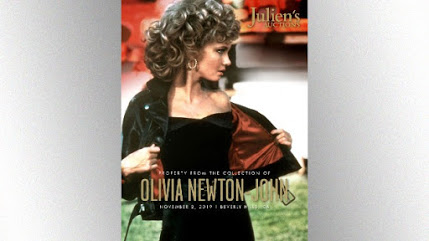 PictureLux / The Hollywood Archive / Alamy Stock Photo/Supplied by Julien’s Auctions(LOS ANGELES) — Olivia Newton-John’s iconic sultry black getup from Grease had many people saying “You’re The One That I Want” on Saturday when it hit the auction block. So much so, bidders dropped a whopping $405,700 winning bid on the pair.

In a press release obtained by ABC News, Julien’s Auctions had the privilege of auctioning off several items belonging to the four-time Grammy award winning singer and pop culture icon.  They even made an event out of it: PROPERTY FROM THE COLLECTION OF OLIVIA NEWTOWN-JOHN.

Fans and collectors alike packed the Beverly Hills auction house, via in person, online, and on the phone in an attempt to get their hands on the once-in-a-lifetime memorabilia.

The big ticket items, of course, were the black leather jacket and figure hugging shiny black pants Newton-John sported at the end of Grease.  The jacket fetched an astounding $243,200 and the pants, which were so tight Newton-John needed to be sewn into them, scored $162,500 on the auction block.

The auction featured other collectibles such as a custom made “Pink Ladies” jacket the Grease cast presented to Newton-John, tan leather dance shoes the actress wore during Grease rehearsals, a one-sheet advance Grease movie poster signed by Newton-John and other cast members; including John Travolta, and the 1983 American Music Award she won for Favorite Female Vocalist Pop.

All the proceeds from the jacket and pants benefited the Olivia Newton-John Cancer Wellness & Research Centre while a portion of all the other items sold went toward the Centre, as well.