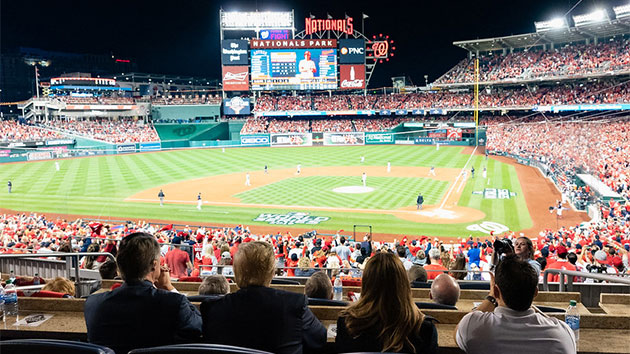 Official White House Photo by Andrea Hanks(WASHINGTON) — The Washington Nationals continued to celebrate their triumphant World Series win before thousands at the White House on Monday — as one player donned a “Make America Great Again” hat and another skipped the ceremony for political reasons. Almost right off the bat, Trump brought up the impeachment inquiry against him, as he discussed how popular the Nationals became throughout their season.”America fell in love with the Nats baseball,” Trump said. “They just fell in love with Nats baseball. That’s all they wanted to talk about. That and impeachment. I like Nats baseball much more.”As Trump introduced players and staff one by one, he brought catcher Kurt Suzuki to the lectern. Suzuki threw on a “Make America Great Again” hat.”I love you all,” Suzuki said. “I love you all. Thank you.”Trump hugged him. “What a job he did,” he said. “I didn’t know that was gonna happen.”Trump said the crowd on the south lawn, which the White House estimated was 5,300 people, was a record. “We’ve never had this many people on the front lawn of the White House,” he told the crowd.Running through the story of the Nationals’ season, Trump congratulated the team, who he said brought the World Series trophy “back to America’s capital.” He called the team’s owners, the Lerner family, “great people,” praised general manager Mike Rizzo, manager Dave Martinez and the other coaches and players, saying, “they’re all here.”But in fact, not all were there.Reliever Sean Doolittle told The Washington Post days ago he would not attend the ceremony.”There’s a lot of things, policies that I disagree with, but at the end of the day, it has more to do with the divisive rhetoric and the enabling of conspiracy theories and widening the divide in this country,” Doolittle said.There were at least 16 other players not in attendance, based on a list of attendees released by the White House. It was unclear why the others missed the ceremony including star third baseman Anthony Rendon.When the president praised players one by one during Monday’s ceremony, he did not mention Doolittle or Rendon.The president attended Game 5 of the World Series in Washington on Oct. 27, and was booed by fans in attendance. Some chanted, “Lock him up!””What a month,” pitcher Max Scherzer told the crowd. “What a magical month.”After pitcher Stephen Strasburg, who this weekend became a free agent, spoke, attendees chanted, “four more years!” Trump added, “I’m going to consider that four more World Series wins.”First baseman Ryan Zimmerman handed the president a personalized Nationals jersey and thanked Trump “for keeping everyone here safe in our country and continuing to America the greatest country to live in the world.”A military band played “Baby Shark” — the team’s unofficial anthem — as the players and coaches emerged from the White House at the start of the ceremony.”That turned out to be a very, very powerful little tune,” Trump said

Allyson Felix reflects on career after last championship run: ‘It’s been such a joy’