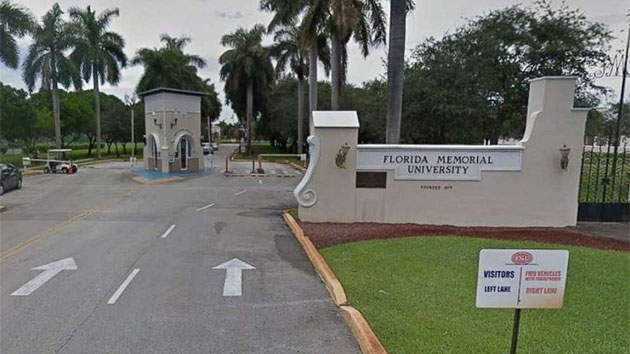 Google Maps(MIAMI) — A Florida Memorial University student sued the Miami-area school for negligence on Tuesday after she was violently raped while asleep in her dorm room, according to the lawsuit.The student, a freshman who had recently moved into an all-girls dormitory, accused the school of failing to protect her on Sept. 12 when two intoxicated men entered her room at around 3 a.m. and threatened to hurt her if she refused to follow their commands, according to the suit.One of the men “brutally sexually assaulted” her despite attempts to fight them off, the suit said. She eventually managed to escape and get help from a neighbor, who chased the men out of the victim’s room.”The attackers laughed at their victims as they fled though the fire exit door without any alarm signaling,” according to the suit.Florida Memorial University did not immediately respond to ABC News’ request for comment, but told several other outlets that it could not comment on pending litigation.The alleged attack took place at the university’s Willie C. Robinson residential hall, which has a “strict policy prohibiting access to the residential wings of the dormitory to male guests,” the lawsuit said. But the men were able to sneak in through the one of the building’s 11 fire exits, according to lawsuit.”The fire exits are not equipped with alarms or any mechanisms to prevent non-emergency use, nor are the fire exits monitored by the RA, RC, security personnel or static CCTV cameras,” the suit said. “As a result, students foreseeably open, prop open, and hold open the fire exits for convenience when exiting the building and when other students are attempting to enter the building.”The victim’s attorney said the dorm was equipped with surveillance cameras, but they were “not operational.” The lawsuit accuses the school of negligence and claims it should have done more to protect students, especially since the dorm is located in a high-crime area.”What happened to this young college student is simply horrifying. Just a few months into her first year away at college, our client went to sleep in her dorm room believing she was safe, and then found herself in the middle of a very real nightmare, fighting for her life,” her attorney, Thomas Hasty, said in a statement. “Colleges and universities have a duty to protect their students whose dormitories become their home away from home. We believe FMU failed in that duty in every way, which resulted in this foreseeable and preventable attack.”There have been at least four reports of sexual assaults on campus in the past three years, the lawsuit said, adding that the school failed to “take necessary and reasonable steps to prevent harm to its tenants and invitees.” Copyright © 2019, ABC Audio. All rights reserved.