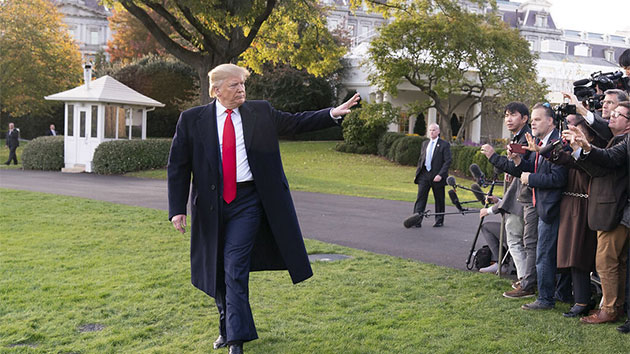 Official White House Photo by Joyce N. Boghosian(WASHINGTON) — Republican lawmakers on Capitol Hill are coming to the defense of the whistleblower at the center of the impeachment inquiry after President Donald Trump and Sen. Rand Paul, R-Ky., called for the individual’s identity to be revealed.Sen. Chuck Grassley, R-Iowa, on Monday said in response to Trump’s comments that it was up to the whistleblower to decide whether or not to come forward.”That’s strictly up to the whistleblower,” Grassley told reporters.”All I want to do is make sure the law is followed,” Grassley said, when asked by reporters if the president’s comments were appropriate. “A person like me that has advocated for whistleblowers for a long period of time — including this whistleblower — I want maximum protection for whistleblowers.”Long-standing whistleblower laws protect the identities of government employees who come forward with accusations of wrongdoing within the government. The whistleblower’s lawyers have said that revealing their client’s name could threaten their client’s personal safety and that there have already been death threats made against the individual.ABC News is not reporting on the whistleblower’s identity. All that is publicly known of the whistleblower is that he or she is a member of the intelligence community.Paul, a close political ally of the president’s, fanned the flames when he called for the whistleblower to be outed during a campaign rally in Lexington, Kentucky, on Monday night.”We know the name of the whistleblower,” Paul claimed, prompting cheers from the packed rally.He went on to make claims about who the person could be and calling for their testimony. He also said that journalists should print the whistleblower’s name.Republicans were quick to denounce Paul’s charge.”Whistleblowers are entitled to protection under the law … to try to reveal the identity of this individual is contrary to the intent of the whistleblower law,” Sen. Susan Collins, R-Maine, told reporters Tuesday.Sen. Roy Blunt, R-Mo. told reporters that he wants the whistleblower to come before the Senate Intelligence Committee, but that he did not agree with Paul’s calls to name the whistleblower publicly.”That’s not my view,” Blunt said of Paul’s comments.Republican Sen. Mitt Romney, R-Utah, a frequent Trump critic, also took issue with Paul’s calls for a public outing.”My view is that the whistleblowers, particularly those that are blowing whistles on action within the government, should be allowed to remain confidential, that they have a right to be private,” Romney said Tuesday. “Going after the whistleblower, I think, is misdirected.”Sen. John Cornyn, R-Texas, said that the whistleblower’s identity is no longer relevant.”At some point, I suspect that the identity will become known. But in many ways, I think it’s kind of a moot point, because as the president likes to say, ‘read the transcript,"” Cornyn said Tuesday. “I think the whistleblower and the whistleblower’s identity has sort of been overcome by other events.”Democrats also blasted Paul for his remarks.”I cannot stress just how wrong this is. We have federal whistleblower laws designed to protect the identity and safety of patriotic Americans who come forward to stand up for the Constitution. There are members on the other side of the aisle, including senior members and chairs of committees, who have spent their entire careers defending whistleblowers and the laws that protect them and their families,” Senate Minority Leader Chuck Schumer said on the Senate floor Tuesday.”Every single member of this body should stand up and say that it is wrong to disclose his or her identity,” Schumer said, adding that more Republicans should come to the whistleblower’s defense.However, Sen. Lindsey Graham, R-S.C., another close ally of the president, defended Paul’s calls to identify the whistleblower.”We need to know who this person is because without the complaint, there would be no Impeachment inquiry,” Graham told reporters on Tuesday.”The whole idea that you would use an anonymous person to generate an impeachment inquiry is dangerous to the presidency itself,” Graham said.When asked if it was responsible for Paul to call for the whistleblower’s identity to be made public, Graham responded, “I think it’s very responsible.” Copyright © 2019, ABC Audio. All rights reserved.

Black Friday 2020: What you need to know before shopping this year’s sales frenzy
“He did what he did”: Sacha Baron Cohen responds to ‘Borat 2’ scene with Rudy Giuliani
Washington Football Team to allow 3,000 fans at stadium
Trump lifts sanctions on Sudan as he announces deal between African nation and Israel
Election 2020 live updates: Trump, Biden back on campaign trail after debate
Senior citizens, key to Trump’s 2016 victory, now far from a sure group for president