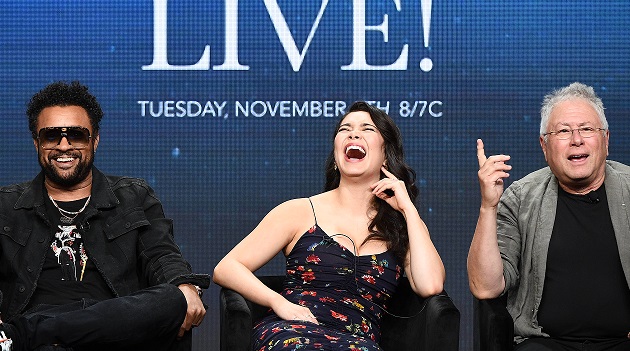 L-R – Shaggy, Cravalho, Alan Menken/ABC Image Group LA(LOS ANGELES) — Tuesday night, The Wonderful World of Disney will honor the 30th anniversary of the beloved animated classic with The Little Mermaid Live! The never-before-seen hybrid format will take viewers on a magical adventure under the sea, as live musical performances by a star-studded cast are interwoven into the broadcast of the original feature film.

“We get to pay homage to the original animation and then we get to make the live performances of the music,” Cravalho says. “[It’s] so special!”

Even though 1989’s The Little Mermaid was released some 11 years before she was born, Auli’i was quite familiar with it.

“I can’t remember exactly when I got [Ariel’s song] ‘Part of Your World’ stuck in my head,” she says, “but it was at a very young age…[I]t definitely integrated itself deep into my childhood.”

“No one is like Ursula….She has sexiness. She is duplicitous…She’s charming when she wants to be,” says Latifah.  “To really put yourself in the shoes of someone who who is…a 100% villain is gonna be a lot of fun.”

John Stamos played Chef Louis in a staged version of the musical at Los Angeles’ famed Hollywood Bowl, and he recalled, “[When] I heard it was announced…I was like, ‘Whoa, Whoa, Whoa. Who’s playing the chef?…Oh, please, let me be part of this!"”

Reggae recording artist Shaggy called his crustacean character Sebastian “such a likeable character,” adding “you can just fall in love with him!”