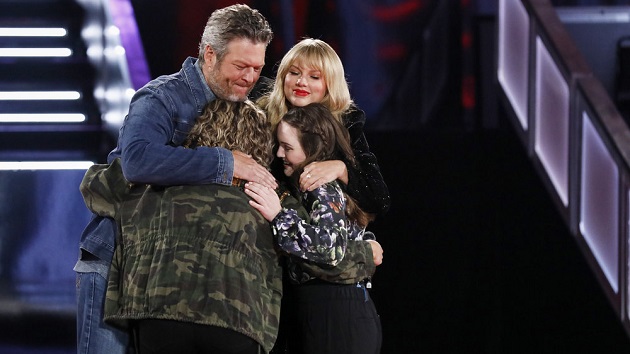 The coaches also got one chance each to either steal an artist from someone else’s team.  John used his on Tuesday to swipe Team Kelly’s Alex Gurthrie.  Gwen and Kelly also used theirs on last week’s shows, leaving Blake as the only artist left with a steal.

Here are the highlights from Monday’s show:

In a battle of Team Gwen’s “powerhouse singers,” Destiny Rayne, singing Demi Lovato’s “Tell Me You Love Me,” faced off against Rose Short, tackling “Big White Room,” by Jessie J.  Both singers did a good job of showcasing their vocal strengths, but Gwen gave the round to Rose, who brought the emotion as well.  She advances to the live playoffs, while Destiny heads home.

Team Kelly’s Kiara Brown, covering Maren Morris’ “The Bones,” faced Shane Q, performing out Brett Young’s “In Case You Didn’t Know.”  Kelly, addressing the camera during rehearsal noted that the two singers couldn’t be any more different, and that the winner would be the one who had the best command over his/her voice.  That honor went to Shane, who, according to Kelly, was “more ready” than Kiara.  She leaves the competition, while Shane moves on to the live playoffs.

Next up, representing Team Blake, was Kat Hammock, singing “Kiss Me,” by Sixpence None the Richer, taking on Lauren Hall, performing her former coach Kelly Clarkson’s 2004 hit “Breakaway.”  Lauren’s performance drew kudos from Clarkson, who believed Hall did a better job of honing into the message of the song than she did on the original.  However, she wished more of Lauren’s personality came through.  Kelly and the other judges gave the round to Kat, as did Blake.  Kat advances to the live playoffs, while Lauren goes home.

Team Legend’s “charismatic singers,” Will Breman and Zoe Upkins, faced off on Ed Sheeran and Justin Bieber’s “I Don’t Care,” and “Like I’m Gonna Lose You” — her coach’s 2015 hit with Meghan Trainor — respectively.  The winner, according to John, would be the artist who “delivers in the clutch.”  It was a tough for John, who chose Will.

Then, Team Gwen’s Jake HaldenVang, delivering his take on “Powerful,” by Major Lazer featuring Ellie Goulding, faced off against Royce Lovett, tackling “Wake Me Up,” by Avicii.  The other coaches were hard pressed to pick a winner, but John gave the edge to Jake.  Gwen was also impressed with HaldenVang’s performance, and declared him the winner.  Royce was sent packing.

The last knockout of the night was between Team Kelly’s Alex Guthrie, performing Sam Smith’s “I’m Not the Only One,” going head-to-head with Hello Sunday, singing “Almost Is Never Enough,” by Ariana Grande featuring Nathan.  Hello Sunday’s Chelsea and Myla, both 14, are huge Taylor Swift fans, and received the ultimate compliment when their rehearsal performance literally brought Taylor to tears.  Afterwards, Blake summed up the contest, by noting that Alex did a great job — his only problem was Hello Sunday.  The duo advances to the live playoffs.

However, Legend also thought Guthrie “brought his ‘A’ game to the knockouts,” and used his steal to nab the artist for himself.  Alex moves on to the live playoffs, now representing Team Legend.

The knockout rounds conclude, when The Voice returns with a one-hour episode Tuesday at 8 p.m. ET on NBC.