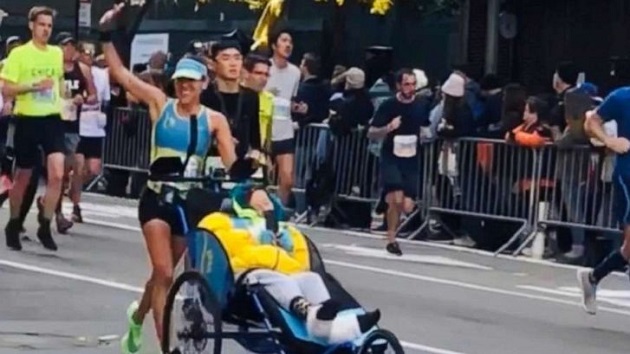 Robin Diamond(NEW YORK) — Caryn Lubetsky and Kerry Gruson have been proving two is better than one when it comes to racing marathons for years.Now, the pair likely set the world record for the fastest marathon run by a woman while pushing a wheelchair during this year’s New York City Marathon.Lubetsky pushed Gruson, who is a quadriplegic, all 26.2 miles finishing with a time of 3 hours, 54 minutes and 25 seconds.Though no world record has yet been recorded for this feat, Guinness World Records set the benchmark at 4 hours flat and the pair are now awaiting official certification.”I just wanted to go out there and enjoy the journey … but we got out there and the crowd was amazing, and we just pushed and gave it everything we had,” Lubetsky told ABC News’ Good Morning America upon finishing the race and meeting the pair’s personal goal. “We broke the world record … but most importantly, we think we showed the world that when two people come together anything is possible.”But before this race, the two had already been doing just that.Gruson became a quadriplegic more than 30 years ago, at the age of 26, when she survived a strangulation attempt while she was working as a journalist. As she was interviewing a Vietnam War veteran, she says he had a post-traumatic stress disorder-related flashback where he believed she was part of the Viet Cong and was trying to kill him. He strangled her and left her for dead in her hotel room.”My whole life changed dramatically in one moment. I couldn’t stop it, but change doesn’t have to be a disaster — it can be an opportunity,” she said.”I was much too stubborn to die,” she said.Gruson lost most of the function of her limbs and her vocal cords after the incident. Her voice is down to a whisper, but she still has much wisdom to share.”We were both victims of the war,” she wrote of her attacker in a New York Times column in 1985. Though traumatic, the attack did not break her, and Gruson went on to work for the newspaper as a news assistant for more than 20 years.Gruson has a passion for adventure and the outdoors, and has found ways to get out and enjoy the world around her. She is a competitive sailor, and has participated in Ironmans, triathlons and countless other incredible feats.She met Lubetsky through a mutual friend and they knew instantly that they had a connection.”We were connected through more than words,” Lubetsky recalled.Together, they founded an organization called ThumbsUp International. According to its website, “ThumbsUp places people in a position to help fellow adaptive/disabled athletes reach their goals.”While one of Gruson’s most defining moments happened at a young age, Lubetsky got her start in running relatively later in life. She ran her first marathon a week before she turned 40 and has been nothing short of a marathon machine ever since.But one race changed her life: the 2013 Boston Marathon, where she experienced the trauma of the bombing with her children — aged 4, 6 and 8 — in the audience.”That was the moment that their innocence was stolen, and it was a moment where I knew, no matter what, that running had to have a bigger meaning than just how fast can I run,” she said. “I had to show my children that no matter what happens in life, when you get knocked down in life, you get back up.””And that’s how I knew Kerry was sent to me,” Lubetsky added. “Because soon thereafter, we met and started our adventures, and it took on that exact same meaning.”Together, the two women set out to make history at the New York City Marathon. Though they’re waiting for the results to be certified, they take pride in having set and likely achieved their goal, and inspired others to never stop going after their own.According to Gruson, they’ll take on The Great Wall Marathon in China in 2020.”We’ve been told it’s impossible for a disabled person, so we’ll just have to see about that,” Lubetsky said.”We always say step by step, we’ll do it together,” Gruson added. Copyright © 2019, ABC Audio. All rights reserved.