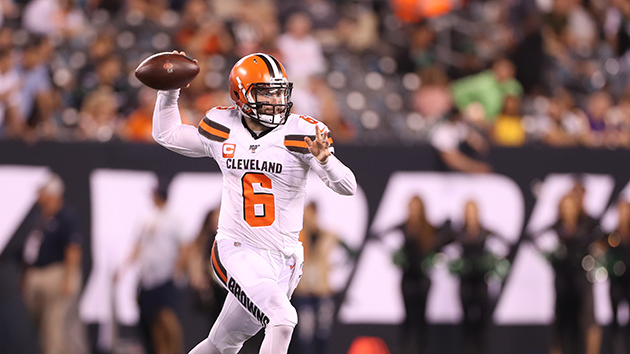 Photo by Allen Kee / ESPN Images(CLEVELAND) — With his team in the middle of a disappointing season, Cleveland Browns quarterback Baker Mayfield earned headlines and questions with his facial hair on Sunday.Mayfield showed up to the team’s game against the Denver Broncos with a beard, later sporting a Fu Manchu or handlebar mustache during the game. He eventually showed up for a postgame press conference following the loss with just a standard mustache.The changing look caused Mayfield to go viral, with many Internet users comparing his looks to that of a character from the movie Home Alone. Actor Macaulay Culkin even got in on the act, reenacting part of the movie with Mayfield in actor Daniel Stern’s role.On Wednesday, Mayfield explained the series of decisions, saying that his original plan was to sport the handlebar mustache.”I was undefeated before Sunday with the handlebar,” Mayfield told reporters. “So I shaved it off because I didn’t deserve it.”Last week, Mayfield abruptly ended a media availability after a testy exchange with one reporter. He later acknowledged frustration over the team’s 2-6 start to the year.Copyright © 2019, ABC Audio. All rights reserved.