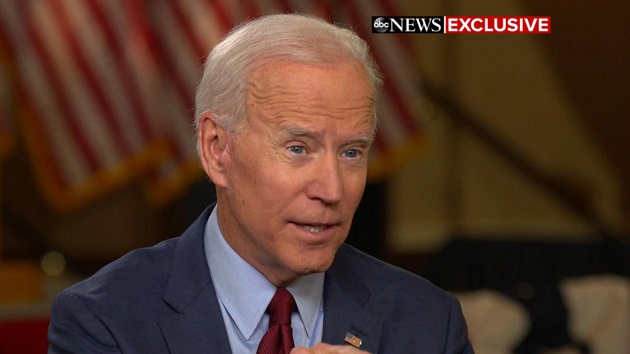 ABC News(WASHINGTON) — Republican lawmakers looking to defend President Donald Trump against allegations of impropriety in the House impeachment inquiry are increasingly pointing to closed-door testimony from senior diplomat Kurt Volker, insisting his version of events means Trump never engaged in an improper “quid pro quo” when he pressed Ukraine’s new president to investigate allegations against Democratic presidential candidate Joe Biden. “The definitive account on all of this is the one from Ambassador Volker,” one of Trump’s staunchest allies, Rep. Jim Jordan, R-Ohio, told reporters on Wednesday morning. Around the same time, Trump tweeted a “thank you” to Volker for his testimony, a transcript of which was released by the House Intelligence Committee on Tuesday.But whatever Volker’s testimony means for Trump’s possible impeachment, the career diplomat’s account explicitly undercuts the specific allegations against Biden that Trump and his allies have been pushing online and on TV for months.”No evidence was brought forward to support (the allegations),” Volker, Trump’s special envoy to Ukraine until two months ago, testified under oath. “I thought they were very self-serving and not credible.”Biden has publicly recounted how, as the Obama administration’s point man on Ukraine when he was vice president in 2016, he pressured Ukraine’s leadership to fire the prosecutor general, Viktor Shokin. Biden even threatened to withhold nearly $1 billion in U.S. aid if Shokin wasn’t removed.”When Vice President Biden made those representations … he was representing U.S. policy at the time,” Volker testified, adding that the policy being executed by Biden “was widely understood internationally to be the right policy.”Also at the time, Shokin’s office was supposedly investigating alleged corruption in Ukraine, including corruption within the major gas company Burisma, which had added Biden’s son Hunter, a lawyer and businessman, to its board two years earlier.Republicans described Biden’s son as someone “with no energy experience and no Ukraine experience.” And in the recent closed-door sessions they wondered whether Burisma may have hired Biden’s son to curry favor with the Obama administration or otherwise protect themselves.Volker told lawmakers it’s “quite possible” that Burisma executives believed they were “buying influence” through Biden’s son, but Volker balked at the notion that Biden would take any improper action on his son’s behalf.”I don’t believe that Vice President Biden would be corrupted in [that] way,” Volker testified.In fact, according to what Volker told lawmakers, Biden’s push for Shokin’s firing was justified.”It was a general assumption … among the European Union, France, Germany, American diplomats, U.K., that Shokin was not doing his job as a prosecutor general. He was not pursuing corruption cases,” Volker testified.The ousted ambassador to Ukraine, Marie Yovanovitch, similarly testified that Shokin had a “notorious reputation” for “not doing his job.”Even Jordan and Trump’s other key congressional ally Rep. Mark Meadows, R-N.C., conceded behind closed doors that Shokin was viewed as “a bad guy,” as Jordan put it.”I guess his reputation was one that he was not serious about really rooting out corruption,” Meadows said, according to a transcript of closed-door testimony.Nevertheless, in March, Shokin’s successor, Yuriy Lutsenko, unleashed a series of explosive allegations about Shokin’s firing.In interviews with a conservative U.S. columnist, Lutsenko alleged that Biden pushed for Shokin’s firing to protect his son and derail the Ukrainian investigation of Burisma.”There’s a lot of talk about Biden’s son, that Biden stopped the prosecution,” Trump told Ukraine’s new president, Volodymyr Zelenskiy, four months later on the now-infamous July 25 call that is at the heart of the House impeachment inquiry.”A lot of people want to find out about that so whatever you can do with the attorney general would be great,” Trump added. “It sounds horrible to me.”In his testimony to House investigators, however, Volker said, “There is clear evidence that Vice President Biden did indeed weigh in with the president of Ukraine to have Shokin fired, but the motivations for that are entirely different from those contained in (Lutsenko’s) allegation.”Lutsenko had his own agenda in hawking the allegation against Biden, according to Volker. With presidential elections in Ukraine just months away, Lutsenko feared he might lose his job under a new Ukrainian administration, Volker said.He “was acting in a self-serving manner, frankly making things up, in order to appear important to the United States, because he wanted to save his job,” and he wanted to save his job at least in part “to prevent investigations into himself for things that he may have done as prosecutor general,” Volker testified. “So by making himself seem important and valuable to the United States, the United States then might object or prevent him from being removed by the new (Ukrainian) president.”Nevertheless, Volker acknowledged in his testimony that the allegations against Biden have “never actually been investigated” and have therefore never been directly or fully debunked.In May, after Zelenskiy was elected Ukraine’s new president and after the allegations against Biden began to attract more media attention, Lutsenko seemed to back away from his initial claims, telling Bloomberg News, “Hunter Biden did not violate any Ukrainian laws (and) at least as of now we do not see any wrongdoing.”Copyright © 2019, ABC Audio. All rights reserved.