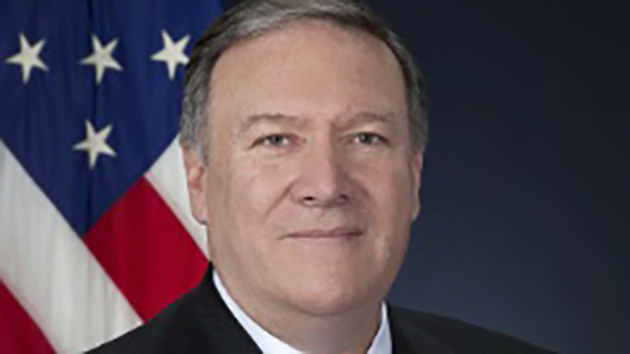 US Department of State(WASHINGTON) — Secretary of State Mike Pompeo on Thursday defended his public statement that a senior adviser did not ask him to issue a statement of support for the former U.S. ambassador to Ukraine after the adviser testified to the House under oath that he asked Pompeo three times to do so.Pompeo, one of President Donald Trump’s closest advisers, has walked a tightrope between sticking by the president and supporting his rank and file as they have been swept up in the House’s impeachment inquiry. But Pompeo’s silence on Marie Yovanovitch, a career Foreign Service officer who was maligned by Trump and his personal lawyer Rudy Giuliani, has frustrated and upset many in the department.Yovanovitch was recalled early from her post in Kyiv, even after initially being asked to stay for another year, she told the House Intelligence, Oversight, and Foreign Affairs committees in October. While the Deputy Secretary of State John Sullivan told her she had done nothing wrong, the president had lost confidence in her, according to Sullivan, after she was disparaged by Giuliani, his associates, and Ukraine’s corrupt former prosecutor-general, who accused her of blocking an investigation into the Democratic Party, giving him a “do not prosecute” list, and badmouthing the president. The former prosecutor-general later walked back those claims.The State Department denied those allegations at the time, but they appear to have influenced Trump’s decision to recall her. In his controversial July 25 call with Ukraine’s new president Volodymyr Zelenskiy, Trump called Yovanovitch “bad news” and said she was “going to go through some things.”Yovanovitch testified that she felt threatened when she read those words when the White House released a memorandum of the call on Sept. 24, according to the transcript of her sworn deposition released by the House.Michael McKinley, a veteran diplomat Pompeo tapped as a senior adviser early in his tenure, testified that after the memo was released, he had three conversations with Pompeo, asking him to issue a statement of support for Yovanovitch. On all three occasions, according to the transcript of his deposition, he said he did not get a response from Pompeo.That seemed to contradict what Pompeo told ABC News Chief Anchor George Stephanopoulos on This Week on Oct. 20.”From the time that Ambassador Yovanovitch departed Ukraine until the time that he came to tell me that he was departing, I never heard him say a single thing about his concerns with respect to the decision that was made,” Pompeo said. “Not once, George, did Ambassador McKinley say something to me during that entire time period.”When Stephanopoulos asked directly whether he was asked to issue a statement of support, Pompeo declined to comment: “I’m not going to talk about private conversations that I had with my most trusted advisers.”Asked about the difference Thursday in Germany, Pompeo initially dismissed the question: “I clearly follow this a lot less than you do. I haven’t had the chance — it’s a pretty busy world out there — I haven’t had the chance to follow this.”But then he dug in, saying McKinley said in his opening statement to the House that “he wasn’t particularly involved in the Ukraine file, so it’s not surprising that when Ambassador Yovanovitch returned to the United States, he didn’t raise that issue with me… In May, when that took place, he didn’t say a thing to me.”That isn’t what McKinley testified, however, and Pompeo declined to answer other questions on the impeachment inquiry during his press conference with German Foreign Minister Heiko Maas.”You can see the media in Washington is fixated on a lot of things you and I didn’t spend any time today talking about, Heiko,” he said later to a question about Yovanovitch.Copyright © 2019, ABC Audio. All rights reserved.