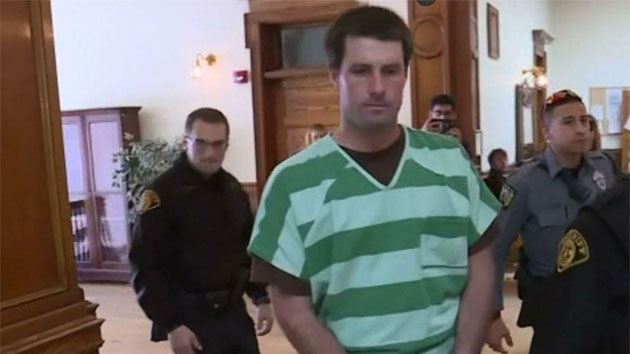 KMGH(DENVER) — At the trial of a Colorado man accused of killing his fiancee, it was cadaver dogs who took center stage on Friday.Prosecutors allege that Patrick Frazee attacked Kelsey Berreth with a baseball bat at her Woodland Park, Colorado, home on Thanksgiving Day 2018 while the couple’s 1-year-old daughter, Kaylee, sat in a playpen in a back room.The 29-year-old’s body hasn’t been found. Prosecutors allege Frazee put Berreth’s body in a black plastic tote and burned it on his property.Frazee was arrested in December and charged with first-degree murder. His trial began last week.Frank Hurst testified Friday about his 140-pound bloodhound named Radar, which he took in February to Nash Ranch, the Colorado property where Frazee leased cattle and Frazee’s ex-girlfriend claims he hid Berreth’s body in a barn.The jury appeared enthralled by a video played in court that showed hay stacked 12 to 15 feet high inside the barn.Radar walked to the base of haystacks and “sat,” possibly alerting investigators to the nearby scent of a decomposed human. Investigators looked up and noticed that the top of the haystack was discolored. It was too high for the dog to climb, so Radar was placed on a forklift.Radar appeared excited, and after he settled down, he started sniffing again. Then he laid down on the spot he believed to have smelled a decomposed human body. Radar then looked up at his handler. Hurst, who described his extremely close relationship with Radar, testified that Radar has never had a false hit. He said Radar can find remains when people have tried to clean up, but bleach can mask the scent.During cross-examination, Hurst admitted to not working with hay before.Defense attorney Adam Steigerwald also questioned FBI Agent Charles DeFrance about a separate search at Frazee’s own 35-acre ranch.In December, a seven-dog team searched Frazee’s entire property, with none of those K9s alerting handlers to any human decomposition scents. Brian Eberle, the handler for another cadaver dog named Lucy, also took the stand Friday.Eberle testified that Lucy was taken to Berreth’s condo on Dec. 4 and zeroed in on the back bumper of Berreth’s car, smelling human decomposition.Frazee’s ex-girlfriend, Krystal Lee Kenney, who claims Frazee called her to clean up the alleged murder scene, has testified that she left trash bags with bloody items by Berreth’s car while she went to shut the front door.Lucy did not alert Eberle on anything inside Berreth’s home, despite the fact that Lee has testified she purposely left some blood behind while cleaning up the alleged crime scene.Lee told the jury Thursday that when Frazee summoned her to Berreth’s home the day after the alleged crime, she “saw blood all over the floor and blood all over the wall. … There was blood on the front of the stove and the dishwasher, and on the floor there were bloody footprints.”Lee, who has admitted to disposing of Berreth’s phone, has pleaded guilty to tampering with physical evidence. She is awaiting sentencing once Frazee’s case concludes.The defense has pointed out that the victim’s body and the murder weapon have never been found.Copyright © 2019, ABC Audio. All rights reserved.