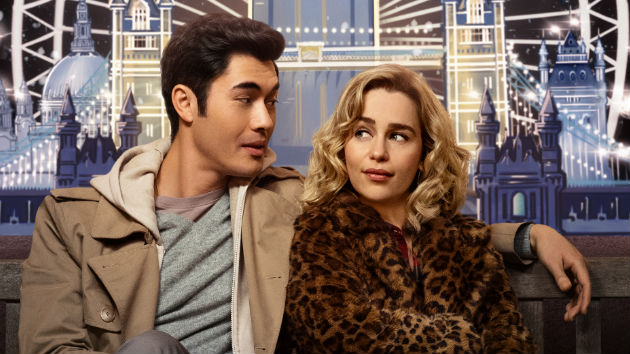 Universal Pictures(LOS ANGELES) — The plot of the romantic comedy Last Christmas, starring Emilia Clarke, Henry Golding and Emma Thompson, was inspired by the 1984 Wham! hit “Last Christmas.” Thompson, who wrote the movie, tells ABC Audio that at first, she wasn’t thrilled with the idea of basing an entire film on a pop song.

“Our producer said, ‘Do you want a write a movie based on the song?’ And I listened to the song and thought, “Ugh……Not really!"” she tells ABC Audio. But she says she and her husband then “started to talk about ways in which we could come at theme of the song from a different angle.”

“I didn’t want to write a classic rom-com because I think they’re a little bit out of date,” admits Thompson. “And…fairytale endings don’t work for me either.”

In the movie, Clarke plays Kate, a young Londoner with serious health issues and very few job prospects.  Thompson says Clarke was perfect for the role.

“She’s had her own kind of…health scares in her life, so she absolutely knew what Kate had been through,” Thompson explains. “And I didn’t know she was as funny as she is! She’s really a clown.”

But don’t ask if Last Christmas has what it takes to be a classic like Thompson’s previous holiday rom-com, Love Actually — because the Oscar-winner has a different goal for this film.

“What I want from this movie is for everyone to go out feeling like they’ve been hugged, and…feel better about everything to do with being human,” Thompson says.

“We can accept and love and tolerate one another to an extraordinary degree — and we need to remind ourselves of that.”