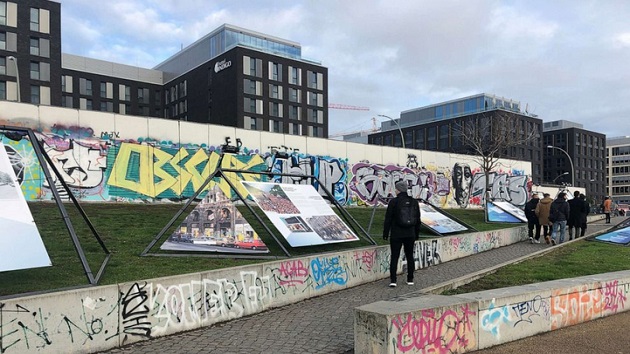 Sarah Hucal(BERLIN) — Although the Berlin Wall came down 30 years ago, suddenly it was standing again — on the cellphone of developer Peter Kolski. The AR app recreates all 100 miles of the wall around what was West Berlin and allows viewers to see where it once stood throughout the city. “You’re at a spot where something was and which was crucial to the history of Berlin, but that’s not there anymore although it’s still relevant,” Kolski told ABC. “When you have the AR experience for a while, you can feel the existence of this wall.” Indeed, standing on a street and suddenly realizing that a familiar view had long been obscured by a 12-foot slab of concrete is indeed uncanny when one is used to Berlin post-1989.The app was launched by Kolski’s company, BetaRoom, during Berlin’s citywide festival for the anniversary of the fall of the wall and Peaceful Revolution. It features 200 events, from theater performances to light installations, all celebrating the iconic moments in history leading up to reunification in 1990 and can be used anywhere.Using the MauARR app (Mauer is the word for wall in German), viewers can walk from one side of the wall to the other, and view stories about the history of the wall as told by characters from East and West Berlin — a divided city that was wholly located within East Germany. AR technology puts digital objects in recreations of the real world, unlike VR technology which builds an entire universe from scratch and requires a pair of goggles for a fully immersive experience.Kolski, who grew up in West Berlin, got the idea when he learned Apple phones would be equipped with AR technology around 2 1/2 years ago: “When I saw that, I thought this is the future, basically,” he said. Yet while AR technology has been popular in the gaming industry with apps like Pokemon Go, Kolski said he has seen few examples of how it can be used to illustrate history. “Financially they (games) are super successful but it’s still just a game. We are really talking about something that was there; it’s helpful and useful” he added.Aside from the app, which can be used all over the city and will be available long after the festival has ended, there are events at seven key locations around Berlin, including the iconic Brandenburg Gate, where citizens stood on the wall for the first time on Nov. 9, 1989.Other locations include the headquarters of the East German secret police, the Stasi, Gethsemane Church which explores how GDR opposition formed, and Alexanderplatz, the location of the largest protest in the history of East Berlin, attended by tens of thousands of demonstrators.At each of the sites, placards shared information about these important moments in history, as well as the experiences of East Berliners. “They wanted to do everything right in the GDR but in the end, it was just a surveillance state…control and fear are the end of democracy” read a statement on one of the signs by a man named Guenter Nossol who fled to West Berlin in 1973.Events also took place at the East Side Gallery, a remaining strip of the Berlin wall painted by 118 artists from 21 countries in 1990. Their works that share a common motif: overcoming repression of the Berlin wall. A nearby stage set up for the festival showcases events, from discussions with artists responsible for the works, to theater pieces that draw on themes of division and reunification.”This positive feeling of togetherness needs to arise once again today, that’s what I wish for generations to come” wrote Lena, a 21-year-old from Berlin. Her message is one of 30,000 that makes up the hanging installation “visions in Motion” by American artist Patrick Shearn. Floating over the main thoroughfare leading up to the Brandenburg gate, the messages, wishes and hopes written by German citizens were inspired by the Peaceful Revolution of 1989.On Nov. 9, a free concert will be held at the Brandenburg Gate given by conductor Daniel Barenboim and the musicians of the Staatskapelle.Later that evening, DJs around the city will spin vinyl into the wee hours — after all, reunification gave birth to Berlin’s thriving club scene. To celebrate, the city’s club commission, is hosting a European club night on the 9th in which twenty-seven European clubs invited to Berlin will collaborate with local venues.”The historical date makes us aware that walls and barriers are no solution. If some in the world rely on isolation and nationalism, then we must hold together all the more strongly, especially in Europe,” Minister of State at the German Foreign Office Michelle Müntefering said in a statement about the event. “The European Club Night brings together young people from all parts of the continent who want to get to know each other, dance together and stand up for shared values.” Such events send “a signal against populism and discrimination in Europe.”