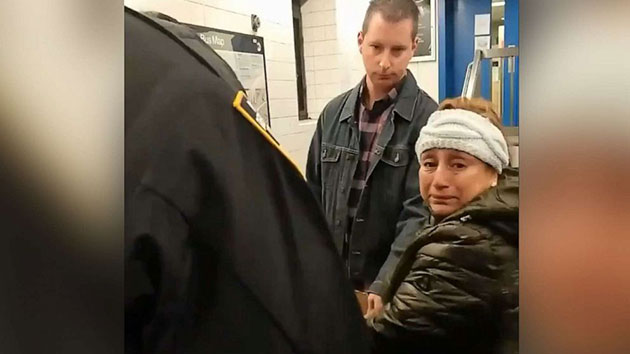 Sofia B. Newman(NEW YORK) — A video of NYPD transit officers handcuffing a woman selling churros at a Brooklyn subway station is causing outrage on Twitter as people criticize the police department. In the video, a woman is seen crying as the officers confiscate her cart and lead her away in handcuffs at the Broad Junction subway station on Friday night.The woman who took the video, Sofia Newman, can be heard repeatedly asking the officers, “Why are you taking her s— away?”When Newman asks if the officers can “just let her keep her stuff,” one officer tells her, “no,” and says, “Can you just back up for right now?” The officer then tells her it’s illegal to sell food inside subway stations.In a subsequent tweet, Newman wrote, “She kept trying to speak to one of the cops in Spanish, but the plainclothes cop kept rolling his eyes and saying things like, ‘Are you done?’ and ‘I know you can speak English."” Newman’s post was viewed more than 2.7 million times as of Monday afternoon.NYPD Chief of Transit Edward Delatorre responded to the video on Sunday, stating that the woman was not arrested and was handcuffed because she “refused to comply.”The woman received a summons and has received 10 summonses in the past six months, Delatorre said, adding that the officers have been responding to a “number of recent complaints of violations” at the station, “including the unlawful and unlicensed sale of food and other products.”During the city’s Veterans Day parade on Monday, Mayor Bill de Blasio addressed the video, saying that while he believes the officers acted appropriately, he wants to “get to a day where that kind of action is not necessary,” but ultimately placed the blame on the vendor.”I understand the facts,” De Blasio said. “The facts are, she was there multiple times and was told multiple times that’s not a place you can be and it’s against the law and it’s creating congestion, and she shouldn’t have been there. But, what we’ve got to work for is the day where we really engage the community in general, to also be clear to members of the community, that that’s not an acceptable behavior.The woman, identified only by a first name — Elsa — told reporters during a rally protesting New York Gov. Andrew Cuomo’s plan that added 500 officers to monitor the subways that she believes the incident “is an attack against the Spanish community,” the New York Post reported.”I felt horrible, nervous and stressed,” she said through a Spanish translator. “They took everything away from me.”Newman told ABC’s New York station WABC-TV, that she’s heard from “many people” that they’ve been buying churros from the woman for the past decade.”She’s very loved in the community, and people really care about her,” Newman told the station.