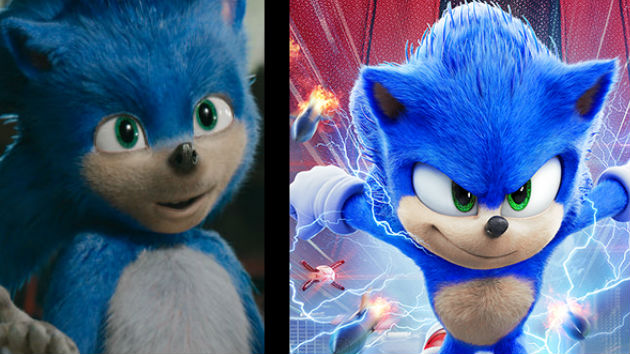 Paramount Pictures(LOS ANGELES) — After disastrous fan reaction to the movie’s first trailer last spring, Paramount Pictures bumped back the release date of its Sonic The Hedgehog movie — and as promised, they gave their title character a much-needed makeover.

Voiced by Ben Schwartz, the first appearance of the computer-created character launched a thousand memes — and none of them flattering. Fans of the SEGA videogame star lamented how little Sonic the Hedgehog actually looked like, well, Sonic the Hedgehog.

The word “creepy” was a common descriptive, particularly relating to the little blue character’s human-looking legs and teeth.

Director Jeff Fowler took to Twitter after the initial trailer dropped to announce he’d hit the pause button: “Thank you for the support. And the criticism. The message is loud and clear… you aren’t happy with the design & you want changes. It’s going to happen.”

It did.  The new trailer show the speedster looking like…well, his old self, which is a good thing. Fans were quick to show their appreciation online.

“Animators: Actually listens to the community/The community: :o” posted another.

The Electoral College: How presidents are elected
Rising infections in Idaho highlight the virus’ latest target: Rural America
Man apologizes as he’s sentenced to life in prison for Mackenzie Lueck slaying
Rochester police offering $10,000 reward for information on deadly mass shooting
Wunmi Mosaku would “run for the hills” if she were actually in her Netflix horror movie ‘His House’
‘The Spanish Princess Part Two’ stars talk representation in the royal court