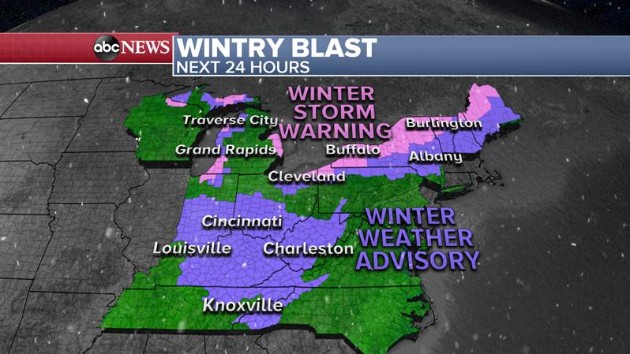 ABC News(NEW YORK) — Temperatures are plummeting across the Plains Tuesday morning and even fell to a bone-chilling 7 degrees in Chicago, breaking the city’s daily record low. Fifteen states from Tennessee to Maine are under winter storm warnings or winter weather advisories Tuesday morning.On Tuesday morning, the wind chill, or what it feels like, is expected to reach -2 degrees in Minneapolis, -12 degrees in Des Moines, and even 7 degrees in Memphis, Tennessee and 11 in Dallas. The arctic air then invades the East Coast Tuesday night, and daily record low temperatures are expected Wednesday morning in the Northeast and the Southeast. The wind chill is forecast to reach 4 degrees in Boston, 12 degrees in New York City, 21 degrees in Atlanta and 18 in Birmingham, Alabama. Ahead of this arctic cold front, a quick-moving storm brought a blanket of snow to the Midwest, turning interstates to ice rinks and sending cars spinning out of control.One plane in Chicago even slid off the runway due to icy conditions while landing at O’Hare International Airport Monday morning, American Airlines said. No one was hurt, according to the airline. “As soon as we landed, we could start feeling something a little off there and we tried to do a little turn and that’s when we started going sideways,” passenger Shaun Steele told ABC Chicago station WLS-TV.Chicago saw a daily record of 3.4 inches of snow on Monday. Now for this season, Chicago has seen over 8 inches of snow, making it the snowiest start to winter since 1884.Severe weather caused more than 1,800 flight cancellations Monday, and the threat isn’t over. Over 200 flights are already cancelled for Tuesday.