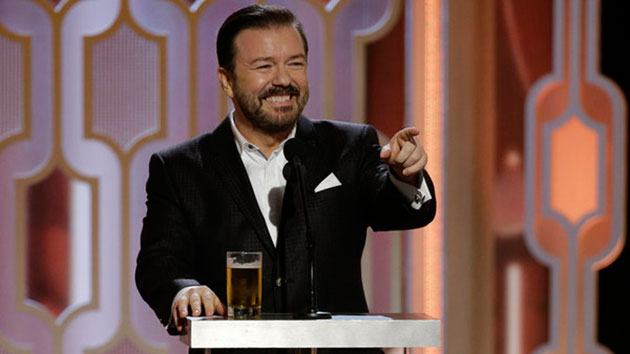 Ricky Gervais hosts the 73rd Annual Golden Globe Awards in 2016; Paul Drinkwater/NBC(LOS ANGELES) — Get ready to cringe/laugh once more: Ricky Gervais will be back as host of the Golden Globes.

Apparently, four years is the time it takes for the Hollywood Foreign Press Association to get over the controversy Gervais’ previous four stints as host generated.  The creator and star of the original The Office and, most recently, Netflix’s After Life, hosted the event from 2010 through 2012, and then again in 2016.

“When Ricky Gervais is at the helm of the Golden Globes Awards, we can always expect the unexpected,” said HFPA President Lorenzo Soria in a statement announcing Gervais’ return. “We’re excited to see it all unfold.”

“In a world where many award shows are opting to go the no host route, the Golden Globes are going all in!” added Mike Mahan, CEO, dick clark productions, referring to the choices by the Motion Picture and Television Academies to do without hosts for the most recent Oscar and Emmy ceremonies.

Each of Gervais’ stints hosting the Golden Globes were met with decidedly mixed reviews, largely because of his love-it-or-hate-it irreverent humor and pointed stabs at the entertainment industry, which elicited as many groans and winces from the audience as it did laughs.