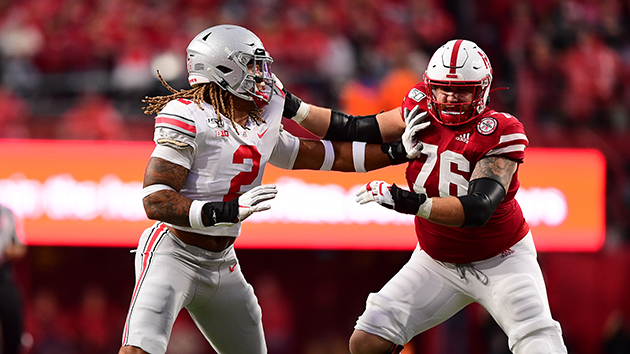 Photo by Phil Ellsworth / ESPN Images(COLUMBUS, Ohio) — Ohio State University defensive lineman Chase Young will miss one more game for violating NCAA rules before returning in time for the team’s game against Penn State next week, OSU announced Wednesday.Young was deemed ineligible before last week’s game against Maryland for accepting a loan from someone he described as a “family friend.” He also said he later repaid that loan in full.Young will also sit out this weekend’s game against Rutgers.The loan is considered an impermissible benefit because he didn’t know the friend until after Ohio State was recruiting him to play football there. “I want to thank and express my sincere gratitude to university staff members who worked so diligently and expertly to learn and understand the facts, and then to report these facts to the NCAA as part of our request to have Chase reinstated,” Ohio State athletic director Gene Smith said Wednesday. “This is the example of the culture of compliance we have at Ohio State. I also want to commend Chase Young and let him know how proud we are of him. He took responsibility for his actions, cooperated throughout the process and understood and accepted that there would be consequences.”In a tweet, Young said he was excited to return to the field. Young had said that he accepted the loan in order to help pay for his girlfriend to fly to last year’s Rose Bowl to watch Ohio State play. The school reportedly learned of the violation after their game against Wisconsin on October 26.Young has recorded 13.5 sacks this season, just shy of the school record of 14. He is considered the top defensive player in college football this season, and a contender for the Heisman Trophy. Copyright © 2019, ABC Audio. All rights reserved.