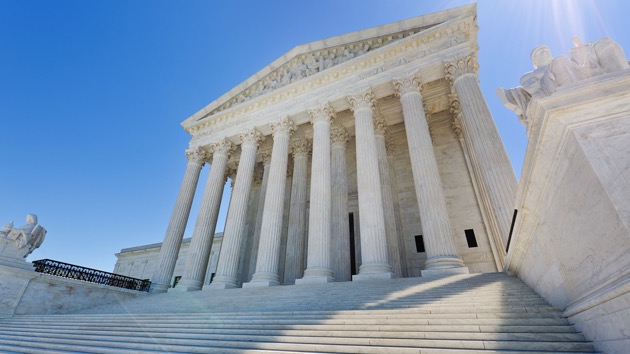 YinYang/iStock(WASHINGTON) — Supreme Court Justice Ruth Bader Ginsburg was not on the bench for oral arguments Wednesday due to a stomach bug, according to the court.The court’s oldest justice, 86, is recovering at home, a spokesperson said.”But she will participate in the consideration and decision of the cases on the basis of the briefs and the transcripts or recordings of the oral arguments,” Chief Justice John Roberts said from the bench at the open of the day’s court session.Notably, Ginsburg is missing the justices’ Wednesday conference to discuss and decide cases argued Tuesday — which were those challenging President Donald Trump’s decision to end the Deferred Action for Childhood Arrivals, or DACA, which President Barack Obama created in 2012 to provide temporary legal status and work permits to immigrants.At issue in the DACA case is whether the Trump administration followed federal law requiring agencies to base policy changes on sound reasoning that is explained to the public. Lower courts ruled that the decision to end DACA was “arbitrary and capricious,” in violation of law.During Tuesday’s oral arguments, the court’s conservative members — including the newest members of the court, Brett Kavanaugh and Neil Gorsuch — seemed inclined to overturn the lower court decision. Overturning the decision would allow the Trump administration to carry on with canceling DACA.Ginsburg and her fellow liberal colleagues, however, pushed back. Ginsburg herself argued with the Trump administration’s Department of Homeland Security’s assumption that DACA is unconstitutional, as outlined in two memos by two now-former homeland security secretaries.”Her whole memo is infected by the idea that this is, one, illegal. It leaves substantial doubt about its illegality,” she said, referring to the memo by Kirstjen Nielsen. “If we take that out, then — the independent ground that you’re asserting, then she would be saying, we stand up and say this is the policy of our administration. We don’t like DACA and we’re taking responsibility for that, instead of trying to put the blame on the law.”Trump Solicitor General Noel Francisco replied that he “very much disagree[d]” with that assessment.Justice Stephen Breyer, meanwhile, suggested a possible middle ground by crafting an opinion that buys time for policymakers to address DACA recipients’ status.This is Ginsburg’s second absence from a public court session in the past year. Last December she took leave after undergoing cancer surgery, which was the first time in her 26 years on the bench she missed an argument. She was also treated for a localized malignant tumor on her pancreas in August before the court convened for the new term.Copyright © 2019, ABC Audio. All rights reserved.