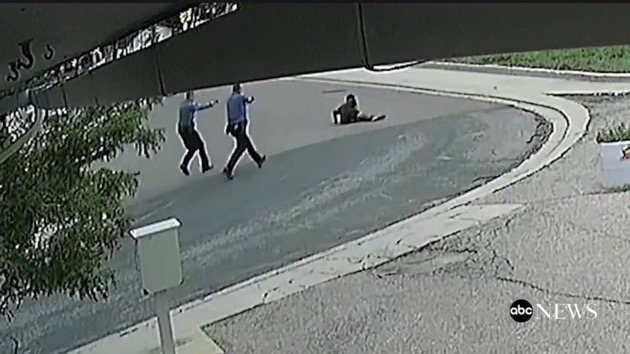 Security footage shows the moment De’Von Bailey was shot by police officers. (ABC News)(COLORADO SPRINGS, Colo.) — A pair of Colorado Springs police officers will not face charges in connection with the fatal shooting of a black man in August.The decision was announced by Fourth Judicial District Attorney Dan May, who said that body camera footage of the incident provided “the best view of an officer-involved shooting” he had ever seen, Colorado Springs ABC affiliate KRDO reported.De’Von Bailey, 19, was shot Aug. 3 by officers investigating a report of an armed robbery. Body camera footage of the incident was reviewed by a grand jury, who found that the officers’ use of lethal force was justified because they had evidence leading them to believe Bailey was armed while he was fleeing, KRDO reported.The footage shows Bailey and another man with their hands up, as officers tell them they have a report of people matching their description with a gun. Officers inform the men that they are going to check them for weapons. Bailey then flees and appears to reach for his waistband, before officers fire on him.Bailey was shot three times in the back and was taken to the hospital, where he later died. The El Paso County Sheriff’s Office said a weapon was recovered at the scene of the shooting.Bailey’s death prompted peaceful protests Colorado Springs, and his family called for an independent investigation into his death.A family representative said the family was disappointed by the district attorney’s decision not to charge the officers.”It is certainly not a surprise when a tainted investigation is presented by a biased prosecutor,” Bailey family attorney Mari Newman said after the announcement. “This is the exact reason why we have called for an independent investigation and an independent prosecution.”It is not clear if the Bailey family will file a civil lawsuit or pursue any additional legal action in relation to the shooting.“We fully acknowledge that there has been confusion and frustration surrounding this incident,” Colorado Springs Police Chief Vince Niski said in a statement released after the announcement.He added that the shooting was investigated by an outside law enforcement agency — the El Paso County Sheriff’s Office — and that the results of their investigation led to the grand jury’s decision.The officers involved in Bailey’s shooting have not been identified.Copyright © 2019, ABC Audio. All rights reserved.

‘Boogaloo Bois’ member charged in attack on Minneapolis police building during George Floyd protests
Rochester police offering $10,000 reward for information on deadly mass shooting
Wunmi Mosaku would “run for the hills” if she were actually in her Netflix horror movie ‘His House’
‘The Spanish Princess Part Two’ stars talk representation in the royal court
Americans threatened by terror, kidnapping plots in Turkey, embassy warns
‘He shot himself in the foot’: Seniors repelled by Trump’s pandemic response