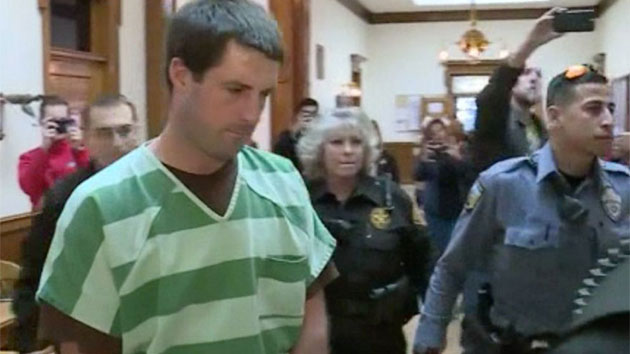 ABC News(WASHINGTON) —  At the trial of Patrick Frazee, a Colorado man accused of killing his fiancee, an expert said Friday that the amount of blood reportedly found in the victim’s home suggests it may have taken 10 to 15 blows from a baseball bat to kill the young mom.”People aren’t easy to kill,” veteran former homicide investigator Jonathyn Priest said as he testified for the prosecution Friday. “They’re very resilient. Beatings are nasty, in that they don’t have the effect that they have on television.”Frazee is accused of attacking his fiancee Kelsey Berreth with a baseball bat at her Woodland Park, Colorado, home on Thanksgiving Day 2018 while the couple’s 1-year-old daughter, Kaylee, sat in a playpen in a back room.Prosecutors allege Frazee, who is on trial for murder, put 29-year-old Berreth’s body in a black plastic tote and burned it on his property.But the defense has stressed that a body and a murder weapon have never been recovered.Prosecutors on Friday showed photos depicting tiny drops of blood found on Berreth’s fireplace and chairs, as well as blood that appeared to have seeped down between hardwood floor boards that were later removed by investigators. Two “significant indentations” on one floor board, Priest testified, could have been created by the strike of a baseball bat.During this testimony, the jury was shown body camera video recorded on Dec. 21 in which Frazee’s ex-girlfriend, Krystal Lee, guided investigators through the condo where Frazee allegedly beat Berreth to death.Lee testified that Frazee called her to come to Berreth’s house where she claims she cleaned up the bloody aftermath. Lee told the jury that Berreth’s last words, as told to her by Frazee, were “please stop.”The 15-minute video begins with Lee pointing out a spot where she says she found blood spatter on the rocks around the fireplace.”Is that consistent with someone being beaten with a bat?” prosecutor Dan May asked Priest.”Certainly it is,” Priest responded.As Priest testified about the blood stains, Berreth’s father put his head in his hands and sobbed.In the video, Lee walked investigators through Berreth’s kitchen, telling them how she wiped blood off of the stove and coffeemaker. She said she found blood on tinfoil that covered a pan of cinnamon rolls.In one shot, Lee used a long piece of wood to point out where she said she found bloodstains high on a wall above the kitchen cabinets. Later in the living room, Lee told investigators she found blood on the drapes that she removed from the home.Priest testified that the type of radiating blood patterns Lee described finding on the wall are consistent with what he called blunt force impacts.When prosecutors showed a photo of the underside of a toilet bowl stained with blood, Priest responded, “Something bloody contacted this toilet.”Lee, who has admitted to disposing of Berreth’s phone, has pleaded guilty to tampering with physical evidence. She is awaiting sentencing once Frazee’s case concludes.During cross-examination last week, public defender Adam Steigerwald recounted the three times that Lee came to Colorado at Frazee’s behest when the defendant allegedly wanted her help killing Berreth. The public defender pointed out that if Lee had been charged with attempted murder and if convicted, she could have faced decades in prison.Instead, prosecutors allowed Lee to plead guilty to moving Berreth’s phone, and now her worst-case scenario is three years in prison, the defense stressed.Lee began to cry on the stand as Steigerwald repeatedly got her to admit that, even though she drove from her Idaho home to Colorado multiple times when Frazee allegedly wanted her help killing Berreth, she never took her suspicions to Berreth’s family, her own family or police.”You were looking at essentially the rest of your life in prison,” Steigerwald said. “Instead, the district attorney allows you to plead guilty to moving Kelsey Berreth’s cell phone.””Your worst-case scenario is three years in prison, correct?” Steigerwald asked. “You could get probation with no jail.””Yes,” said Lee, through tears.