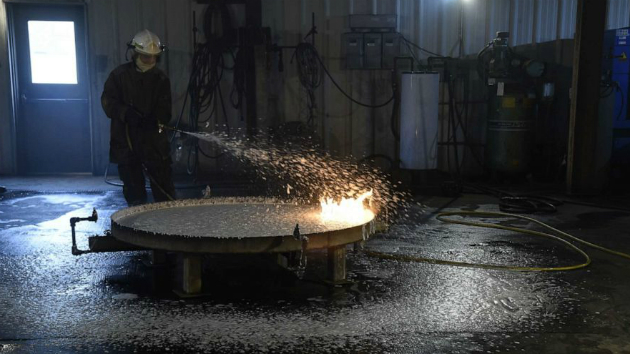 (U.S. Navy) PFAS-free firefighting foam was tested in late October at the Naval Research Laboratory in Washington D.C.(WASHINGTON) — Testing is still at a small scale, but U.S. Navy researchers are encouraged by their work to develop new firefighting foams that do not contain the “forever chemicals” known as PFAS, that at high levels have been linked to increased health risks, including cancer.PFAS, which stands for per- and polyfluoroalkyl, is known as a “forever chemical” because it never degrades and will remain in the soil permanently.While found in a variety of household products and non-stick surfaces, PFAS compounds are found in large concentrations in the firefighting foams first developed by the U.S. military more than 50 years ago to put out jet-fuel fires at military bases and aboard warships.Over time, the PFAS in the foam enters the groundwater surrounding some military bases, which affects drinking water.The Pentagon has made tackling the risks of PFAS contamination at military bases and surrounding communities a top priority.Part of that effort includes developing a firefighting foam that is PFAS-free but maintains the ability to put out jet fuel fires quickly.”We have two goals. One is to eliminate PFAS, so we’re working with completely fluorine-free materials” Dr. Ramagopal Ananth, a Navy Research Laboratory chemical engineer and principal investigator, told ABC News. The other goal is to “provide the same level of protection to the warfighter.”For the past two years, Ananth and other researchers have been working with silicon as a potential replacement for PFAS in the foams.”We believe that there are certain aspects of silicon that behave like fluorine, but maybe reduce the toxicity or eliminate it,” Ananth said. “And we can maybe get the same results.”The silicon is not only bio-degradable but is also “cannot make any PFAS at all,” according to Ananth.Current foams, known formally as AAAF aqueous film-forming foams, work by covering a burning liquid’s film layer preventing fuel vapors from continuing to fuel the fire.”The foam layer is the key part that we want to mimic,” Ananth said.”Past efforts have really focused on the film-forming aspect of AAAF,” Katherine Hinnant, an NRL chemical engineer, told ABC News. “We think that the foam plays a bigger role in this process. So we’re choosing to focus on the foam layer and not just the film layer.””We’re very excited to work with different molecules and make different molecules that might incorporate silicon,” Hinnant said.Promising results of the new foam in the test lab led to a larger test in late October at the Naval Research Laboratory in Washington D.C.In that test, a six-foot-wide pool of fuel was set ablaze so a trained firefighter could spray the new foam to see whether it could extinguish the fire.Video of that test showed that the fires were extinguished completely, though at various timeframes.Researchers have partnered with universities to study if there are any long-term environmental or health impacts from the use of silicon in the new foams.Other researchers with military services and commercial partners are also working on other alternatives to PFAS in the firefighting foams.For now, Navy researchers are encouraged by their results, but they acknowledge a lot more work remains.”We don’t want to be forced into finding an alternative that might be bad for the environment,” Hinnant said. “So at this time, we’re really just doing the basic research that needs to be done to ensure that the molecules that we’re putting out, the things that we say are going to benefit the warfighter are really things that we have data to back up.”

“It takes time, but we’re very encouraged by it and know that the work that we’re doing is really important,” she added.Copyright © 2019, ABC Audio. All rights reserved.