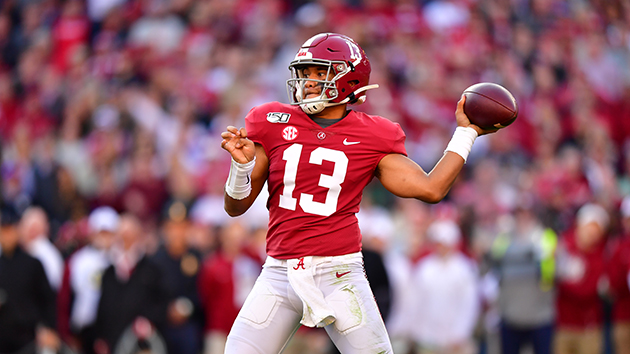 Photo by Phil Ellsworth / ESPN Images(TUSCALOOSA, Ala.) — Alabama quarterback Tua Tagovailoa will miss the rest of the season after suffering a dislocated hip with a posterior wall fractureduring Saturday’s game against Mississippi State. He was later airlifted to Birmingham for CAT scans and MRIs.

Doctors are continuing to evaluate the severity of the injury.

With three minutes left in the first half, Tagovailoa was taken down by a pair of MSU defenders. He was unable to put pressure on his right leg as trainers helped him to his feet.He also suffered a bloody nose on the play.Alabama head coach Nick Saban told ESPN’s Molly McGrath that Tagovailoa was set to come out of the game following that drive. Saban had kept him in the game to practice a two-minute drill.Alabam was leading 35-7 at the time. “We’ve got to block them better so he doesn’t get sacked,” Saban added. “It’s too bad.”McGrath reported that Tagovailoa was screaming in pain as he was lifted onto the cart.

Saban later called the injury “probably something that could be serious.”Tagovailoa was considered a serious contender for the Heisman Trophy this season, and could be a top-10 pick in next year’s NFL Draft. Earlier this year he missed one game after undergoing surgery on an ankle injury.

Tiger Woods returns to Masters with strong opening round