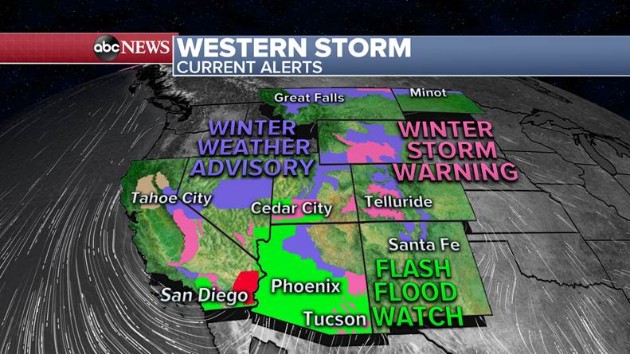 ABC News(NEW YORK) — Two to three inches of rainfall is flooding roads from San Diego County to Arizona, even stranding some people in Southern California overnight due to flash flooding. Nine states from California to North Dakota are under flood, snow and wind alerts as this storm slowly moves east. Heavy rain is falling in Southern California, Nevada and Arizona Wednesday morning and flash flooding warnings continue on Interstate 10 east of Palm Springs.In the higher elevations, snow is falling Wednesday morning from the Sierra Nevada mountains in California to Montana. By Wednesday night into Thursday morning, the storm will reach the Great Lakes and northern Plains, bringing heavy rain from Minneapolis to Chicago. The southern Plains, from Oklahoma to Arkansas and into Tennessee, may also get hit by heavy rain as the storm moves east Thursday. Some areas could see up to four inches. Meanwhile, the north will see snow from the Dakotas to northern Minnesota and the Upper Peninsula of Michigan. A winter storm warning was issued for northern Minnesota where nine inches of snow could fall. No major accumulation is expected for the Twin Cities. The heaviest snow will be in the Rockies with 2 feet possible in Colorado. Snow is also possible in the mountains outside of Los Angeles, San Diego, Las Vegas and Northern Nevada, where some areas could also see two feet.