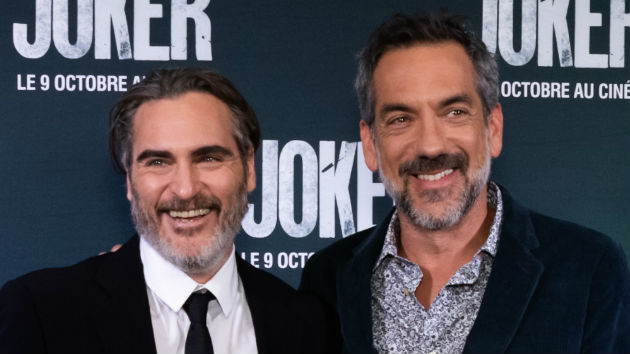 L-R – Phoenix, Phillips/Courtesy of Warner Bros. Pictures(LOS ANGELES) — The Hollywood Reporter says that Todd Phillips is working on a sequel to Joker, and Warner Bros. is looking  toward having the filmmaker develop more DC Comics-based origin stories.

While the studio has a sequel option in place for star Joaquin Phoenix, there’s no news yet on his participation as yet.

The Joker sequel should come as no surprise: it’s already the highest-grossing R-rated film of all time globally, with over a billion dollars gross earnings since its release, as well as the most profitable DC film ever made.

With The Batman underway with writer-director Matt Reeves, a follow-up to the blockbuster Wonder Woman from director Patty Jenkins in production, and director James Wan developing, and possibly directing a sequel to his WB hit Aquaman, it’s likely Phillips will explore more DC villains, the trade speculates.

By the way, THR reports Phillips’ Joker payday could be 100 million bucks.  That’s because instead of taking a director’s salary on the film, he chose a bigger portion of the profits, called “back end” in the industry. When your movie crosses the billion dollar mark, that “backend” means somebody’s backing up the Brinks trucks for you.

Incidentally, THR also notes Phillips opted for a similar deal with The Hangover. Made for a modest budget, like Joker was, the 2009 comedy raked in $467.5 million worldwide, which also spelled a sweet payout for Phillips.  All told, the three Hangover movies grossed $1.42 billion.

In Brief: ‘Criminal Minds’ revival coming to Paramount+ in November, and more