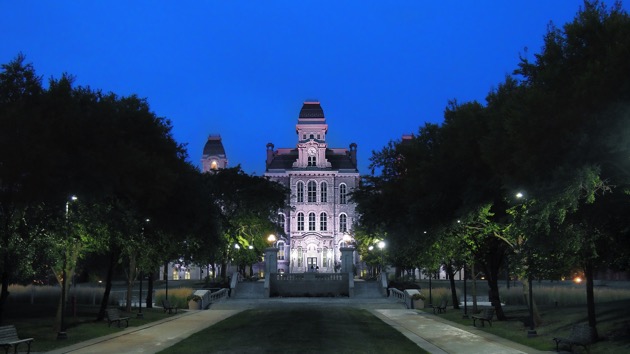 DebraMillet/iStock(SYRACUSE, N.Y.) — A large group of students walked out of a forum Syracuse University’s chancellor held in response to a recent number of reported racist incidents across the campus.At the forum Wednesday, the group of students presented Chancellor Kent Syverud with a list of recommendations pertaining to school safety. When the chancellor would only sign off on 16 of the 19 recommendations, the students walked out and went on to protest in front of Syverud’s home, reported ABC News’ Syracuse affiliate, WSYR.”I signed the recommendations presented by international students and the students peacefully protesting. Of the 19 recommendations made by student protestors, I have agreed to 16 as written; I have suggested minor revisions to the other three for them to consider,” the chancellor said in a statement Thursday.Student group Not Again SU is calling for the resignations of Syverud as well as the head of Syracuse University’s Department of Public Safety, the senior vice president for enrollment and student experience, and the associate chief with law enforcement and community policing, according to WYSR’s report.Student recommendations to the chancellor included requiring mandatory diversity training for the school’s faculty and staff, no consequences for students participating in sit-ins and the development of “multicultural offices,” according to a memo obtained by ABC News.The chancellor pushed back on a recommendation that he create “an open forum for students to share their student experiences” and amended the recommendation to indicate that he would “strongly urge” the board of trustees to create the forum instead.In another recommendation, students requested the implementation of a “housing portal” as an “option in the roommate selection process to allow future residents to choose a roommate based on mutual interests and identities.” The chancellor signed off on the recommendation but crossed out the word “identities.”A recommendation to “make diversity training status of tenured professors readily available through this public website,” was also amended by the chancellor with “up to the extent permitted by law.”Tensions have surged across the campus in the wake of several reported racist incidents. Last week, an African American female student reported she was verbally assaulted with a racial epitaph.In another on-campus incident, a swastika was found drawn into the snow and racist graffiti was found inside a residence hall earlier this month. The latest reported incident was the circulation of what was considered a white supremacist document via a smartphone app – that incident is currently being investigated as a possible hoax.Four Syracuse University students have been suspended so far as a result of investigations.”I can sign, and will sign to show the 98% that I can agree with and I do agree with and have the power to agree with and I will do that as promptly as a I can,” Syverud said after many of the students walked out, reported WYSR.Copyright © 2019, ABC Audio. All rights reserved.

Brandon Woodruff, convicted of killing parents in 2009, fighting for his freedom