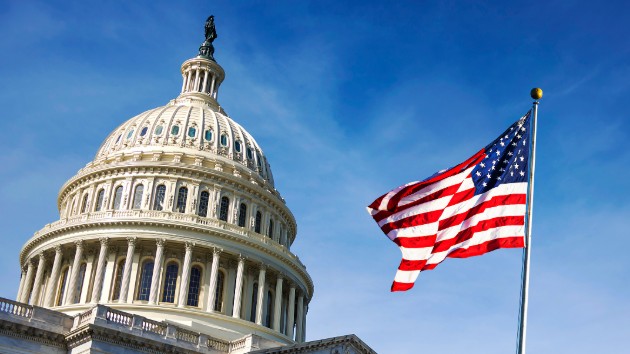 rarrarorro/iStock(WASHINGTON) — Senior White House officials, including Jared Kushner, met privately Thursday with a group of Republican senators to discuss an all-but-assured Senate impeachment trial, with participants discussing a potential two-week, abbreviated timetable for the proceedings, a senior Trump administration official told ABC News. Six Republicans, mostly from the Senate Judiciary Committee, including Chairman Lindsey Graham, John Kennedy of Louisiana and Mike Lee of Utah, met with White House counsel Pat Cipollone and acting White House chief of staff Mick Mulvaney, among other senior officials, who were said to be in “listening mode.” “I don’t know what appetite anybody has as for a long, drawn-out trial,” Graham told reporters.”There is no consensus. That’s just an idea,” the senior administration official said about the possible trial duration, as first reported by The Washington Post.”I think two weeks was thrown out as more of an example, not a goal. It’s not written on a stone tablet,” one GOP aide to a meeting attendee told ABC News.This group was hosted by White House Legislative Affairs Director Eric Ueland, a former long-time Senate aide and impeachment veteran.The meeting was part of a host of gatherings of key senators who have attended meetings with Euland, some one-on-one, others with President Donald Trump himself, as the White House gauges what the Senate will bear in terms of a trial.Graham said the group talked about “what happened in the House and what was the senators’ view of a trial.” Graham also said he wanted to make sure that the White House understood there are not enough votes to dismiss the case right out of the gate, therefore a trial is a foregone conclusion.”Most everyone agrees there’s not 51 votes to dismiss this before the managers present their case,” Graham said.Graham, a former Clinton impeachment manager in the House, laid out what he experienced and suggested to attendees that the “trial record” be “what happened in the House.”Trump continued courting senators on Thursday at a lunch with eight key lawmakers ahead of a trial, bringing up the topic briefly off the top of the meeting, according to attendees.”He talked about impeachment and how frustrated he is at the inability to defend himself,” Sen. Shelly Moore Capito, R-W.Va., recounted. “But he didn’t dwell on it. He didn’t take up the lengthiest part of our conversation by any means.”Capito said Trump was in a good mood, but “he feels that whatever’s come forward has been exactly what he says — useless — and that’s basically it.”Two White House sources tell ABC News that Trump repeated familiar lines about how unfair the process has been and how he has done nothing wrong, adding that the president lashed out at “Pelosi and Shifty Schiff.”Sen. Mitt Romney, who has voiced concern about the president’s actions in the Ukraine matter, attended the meeting, describing it as “very delightful,” noting that Vice President Mike Pence and other senior officials were also in attendance.No senator replied with any comment on impeachment after Trump brought it up, attendees said.”With regards to the president’s comments, he didn’t … say anything or raise any topics and he hasn’t said on TV multiple times,” Romney said, noting that no senator in the room offered a reply to Trump.Romney is part of a group of senators who could be key to any Senate proceeding, as any resolution setting the parameters of the trial needs a simple majority to pass.Sens. Rand Paul, R-Ky., Susan Collins, R-Maine, Chuck Grassley, R-Iowa, and John Hoeven, R-N.D., also attended the Trump lunch.Senators, for weeks now, have been holding briefings with experts and schooling up on impeachment, knowing that a trial is inevitable.Even the president’s top allies, including Graham, now concede there is no way to stop a trial.”There’s just no way you can stop it. We get that now. So, let’s do this,” Graham said.A senior administration official told ABC News of the White House meeting, “It was the beginning of a conversation and decisions on strategy will be made by one guy who was not at the meeting: the president.” Copyright © 2019, ABC Radio. All rights reserved.