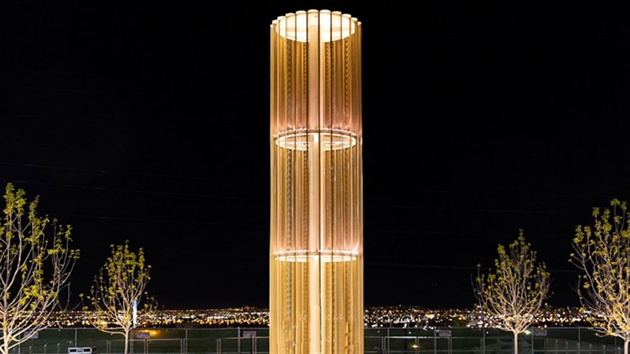 Walmart(EL PASO, Texas) — The victims of the El Paso Walmart mass shooting were honored Saturday with a permanent memorial at the store.The “Grand Candela,” Walmart’s 30-foot memorial, was publicly dedicated in a ceremony at 7:30 a.m. local time.The event comes four months after the Aug. 3 shooting that left 22 dead and dozens of others injured.”Nothing will erase the pain of August third. The memory of that will stay with us forever… For many of those gathered here today, August third will be remembered as the day they lost loved ones,” Todd Peterson, the Walmart regional manager whose territory includes El Paso, told the small crowd at the ceremony.

The “Grand Candela” is made up of 22 perforated aluminum arcs that are grouped together as one and illuminated to symbolize “the community’s unity and strength while emanating light into the sky,” according to a statement from Walmart.”May this memorial stand as a solemn tribute to those who lost their lives on August 3rd, be a beacon of hope for survivors and a lasting reminder to all of the enduring strengthen, resiliency and love that unites El Paso,” a plaque at the site reads, Peterson said.It was lit for the first time Friday night in a private ceremony for the families of the victims and survivors.The memorial was built on the south side of the parking lot and will be enclosed in decorative metal fencing to give it a sense of place, according to the company’s statement.In late August, Walmart announced plans to completely renovate the store following the shooting.Copyright © 2019, ABC Radio. All rights reserved.