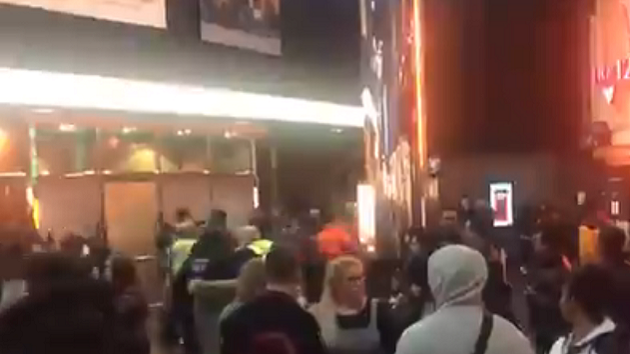 Rachael Allison/Twitter(NEW YORK) — A brawl involving machetes, knives and up to 100 youths erupted at a movie theater in the United Kingdom and left 7 police officers who tried to stop the fight with injuries.Dozens of police officers were called to Star City, a family entertainment and leisure center in Birmingham, just after 5:30 p.m. to reports of a group of youths wielding machetes inside, according to a statement from the West Midlands Police.When officers arrived on the scene they were greeted by massive unrest and a group of up to 100 teenagers fighting in around the cinema while families who were there trying to enjoy their Saturday afternoon fled the scene.“This was a major outbreak of trouble which left families who were just trying to enjoy a night out at the cinema understandably frightened,” said Superintendent Ian Green of the Birmingham police. “We worked quickly to move the crowds on, but were met with a very hostile response and officers had to draw Tasers to restore order.”Five teenagers were arrested on site including a 13 and 14-year-old girl, a 14-year-old boy, and a 19-year-old male on suspicion of assaulting police. Another 14-year-old boy was held on suspicion of obstructing police.

#STARCITY | A number of arrests have been made following disorder at Star City in #Birmingham tonight.We were called just before 5.35pm to reports that a group of people with machetes had arrived at the cinema within the complex. pic.twitter.com/O2XSUQvnks

— West Midlands Police (@WMPolice) November 23, 2019 A dispersal order granted authorities the power to move crowds on and to arrest those who refused to leave. Police say that the area was mostly clear by 9 p.m. The movie theatre made the independent decision to close for the evening after the melee.Two machetes were seized at the scene of the crime as well as knife that was found in a traffic circle near Star City, but police are looking for more people involved in the fight who managed to escape the area.

— Rachael Allison (@_rachaelallison) November 23, 2019 “We’re aware of a number of images and videos circulating on social media which appear to show those involved in last night’s violence. We are assessing those and have already had a number of phone calls from members of the public giving us the names of people they believe were involved last night,” the West Midlands Police statement said. “I’d ask anyone with images or video who has not yet got in touch already to do so that we can make further arrests.”Seven police officers suffered minor facial injuries while they attempted to get control of the situation in Birmingham.“Thankfully, the injuries to our officers were very minor. We’ve also recovered two machetes and a knife, and it’s clear that some of those who went to Star City last night were intent on causing trouble,” the West Midlands Police confirmed. “We’ve had a great response from the public who have been very supportive of our officers. We understand that families with young children will have been left upset by what they saw last night, but we urge people to appreciate that our aim last night was to protect the public and restore order, and that’s what we achieved.”Copyright © 2019, ABC Radio. All rights reserved.