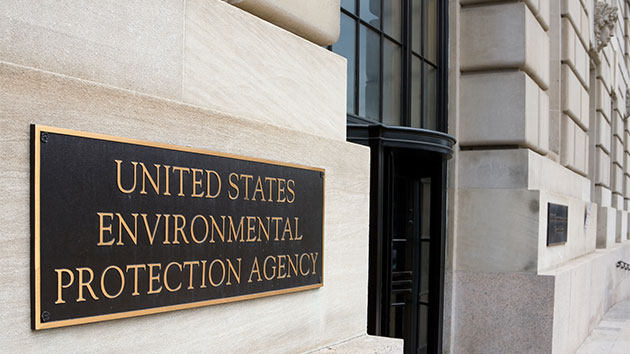 Skyhobo/iStock(WASHINGTON) — Environmental Protection Agency chief Andrew Wheeler says the agency is working “aggressively” to develop regulations around a concerning group of chemicals, known as “forever chemicals,” because they don’t break down naturally in the environment.Wheeler said the EPA is taking major steps toward its action plan to address the so-called “forever chemicals” announced earlier this year through a proposal released Monday and more moves in the coming weeks.The group of chemicals, technically known as PFAS, are used in a variety of products ranging from nonstick and waterproofing products to military-grade firefighting foam.Some types of the chemicals have been linked to health problems such as kidney disease or some kinds of cancer.Activists in some communities impacted by “forever chemicals” have criticized the EPA and the government for moving too slowly to address the issue, but Wheeler said the EPA is moving aggressively to ensure that drinking water is safe from contamination while conducting more research and developing plans to address other aspects of the problem.”We are moving aggressively as well as we promised we would back in February,” he told ABC News in an interview on Monday.The EPA announced a proposal on Monday that would require facilities using the chemicals to track and report how much they release. Wheeler said the agency is also poised to announce guidance for how to clean up the chemicals when high levels are found in groundwater and take the next step to update the amount of the chemicals that is considered safe in drinking water in the coming weeks.Part of the EPA’s action plan could list two of the most well-documented types of these chemicals — abbreviated as PFOS and PFOA — as hazardous under the Superfund program, which would require more of them to be cleaned up where they were released. Wheeler said the EPA is still working on that step and consulting with other agencies.”The thing that I want to assure the American public, if it is a problem in their community, if we discover it’s a problem of their community, we’re going to make sure that it gets cleaned up so that everybody’s drinking water supply is safe and secure,” Wheeler said.Wheeler also said he doesn’t support some legislation that has been proposed by members of Congress critical of EPA’s response to the chemicals. Bills introduced in the House and Senate could designate all types of PFAS chemicals as hazardous or set a limit for how much is considered acceptable in drinking water. He said EPA has a scientific process to make those determinations and that the bills proposed in both the House and Senate could put financial burdens on water systems that take away from other priorities.”The PFOA, PFOS is is a real concern and people need to be concerned about it and the water systems need to be concerned about it,” he said referencing two types of the chemicals that have been linked to health problems at high levels.”But when you only focus on that, it could take resources away from other issues or problems that the water systems have diverted to just this. And this may not be a huge problem in every community,” he added.EPA also announced $4.8 million in grants to research the impact of chemical contamination in agriculture and food, particularly in milk produced by dairy farms where cows have been exposed to the “forever chemicals.” Wheeler said that research will help the EPA and the Department of Agriculture understand if the chemicals are spreading into the food supply.The chemicals are the subject of a new film called “Dark Waters” starring actor Mark Ruffalo, who also spoke to lawmakers on Capitol Hill last week and called for more government action on the issue.Wheeler said he hasn’t seen the movie or followed the details so he can’t speak to whether it’s completely factual, but said it’s good a movie can help educate people on the chemicals in our environment and the possible risks.”I think that it serves a healthy purpose as far as alerting people to the chemicals within, in our daily lives. I think that’s important for people to understand,” he said.Copyright © 2019, ABC Audio. All rights reserved.