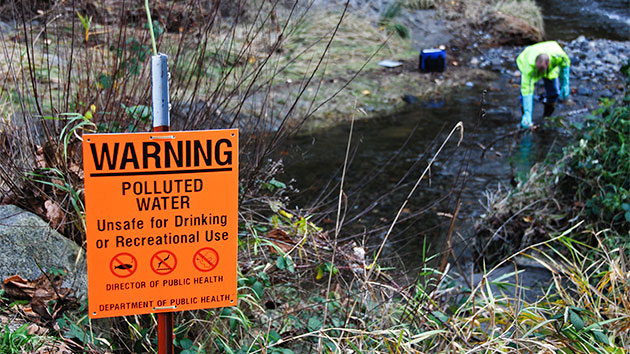 PhilAugustavo/iStock(NEW YORK) — The head of the Environmental Protection Agency says the government is working “aggressively” to develop more regulations on a type of chemicals known as PFAS or “forever chemicals.”But what are they? Here’s what you need to know.What are PFAS?PFAS stands for per or polyfluoroalkyl substances, a group of hundreds of manmade chemicals that are used for a variety of industrial and commercial uses ranging from the firefighting foam used at airstrips and on military bases to waterproof or nonstick products, such as stain repellent, cleaning products or food packaging.They are sometimes called “forever chemicals” because they take a long time to break down in the environment.The chemicals are so common that the Centers for Disease Control and Prevention says almost all Americans have a measurable amount of the most well-known types in their blood.But because there are so many varieties of PFAS chemicals, the bulk of the research about the health effects focus on some of the oldest types, such as PFOS and PFOA. Though they are no longer in active use, they are still being found in drinking water and groundwater around the country.One advocacy group, the Environmental Working Group, has tracked government testing that shows up to 16 million Americans could have amounts of PFOS and PFOA in their drinking water sources, above the EPA’s recommended health limit. Many more have a measurable, but still small, amount of the chemicals in their water.What are the risks?Most of the research about the health risks of PFAS chemicals focuses on PFOS and PFOA, in part because PFOA — which was known as C8 at the time — was the focus of a high-profile lawsuit that began in 1998 about contamination from a DuPont facility in Parkersburg, West Virginia. That case is the topic of the recently released movie “Dark Waters” starring Mark Ruffalo as the lawyer who sued DuPont.That lawsuit forced the company to fund scientific studies of the health effects on community members who were exposed to the chemicals. The research has found high cholesterol, which is a risk factor for heart disease, gastrointestinal diseases such as ulcerative colitis, thyroid disease and high blood pressure during pregnancy, which is a risk factor for decreased fetal growth.An agency within the CDC that evaluates the human health risks of chemicals found PFOS and PFOA released a report last year that found that they caused health effects in rodents at lower levels than the EPA’s recommended health limit, including the increased risk of some cancers, interfering with hormones and the immune system, and growth and developmental impacts on children and infants.PFOA and other older types of PFAS chemicals are known as “long chain” because the chemical bonds form a long chain that doesn’t easily break down. Newer types of PFAS chemicals have shorter chemical chains that are believed to break down more easily, but less is known about the long-term effects.What is the government doing about these chemicals?The EPA has a recommended health limit of 70 parts per trillion for how much PFOS and PFOA is considered safe in drinking water. The health limit is not a mandatory maximum requirement, but health agencies and drinking water systems have to respond if levels are found to be higher than that.EPA is in the process of evaluating whether to set a maximum limit on the amount of PFAS chemicals allowed under the Safe Drinking Water Act, which would require more extensive testing and requirements to treat drinking water sources to prevent exposure to the chemicals. The agency is also considering whether to list some types of the chemicals as “hazardous” under the Superfund law, which would require that they be cleaned up when found in the environment at high levels.Some states, including Michigan, have been testing more extensively for PFAS chemicals and have found them in multiple drinking water systems across the state as well as in the groundwater, rivers and lakes, and in wildlife thought to have been drinking water contaminated with the chemicals. In those cases, the state has issued warnings to residents to avoid coming in contact with the foam that can form in contaminated sources or even eating fish or deer from the area.Michigan and several other states are considering setting state-level requirements for how much PFAS is allowed if the federal government sets a higher limit. But EPA chief Andrew Wheeler has said he’s concerned states are setting requirements based on specific studies rather than looking at the entire body of research.The federal government has started to look at stricter rules for PFAS chemicals, including how much is considered acceptable in drinking water, how to prevent them from entering the food supply and when amounts are high enough that they are required to be cleaned up in soil or groundwater. Agencies including the EPA are also funding more research to better understand the chemicals, including how they impact the food supply. The CDC is also working with health agencies to study the impacts on human health at seven different sites around the country.There are also questions about who should be required to pay for the costly cleanups across the country. The Department of Defense has committed to spending millions of dollars cleaning up contamination around Air Force bases where firefighting foam was used, but there is also a push for the chemical companies who created the chemicals to be responsible for some of the costs. Copyright © 2019, ABC Audio. All rights reserved.