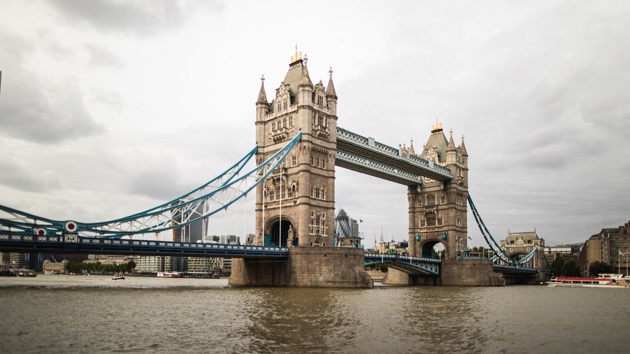 miodrag ignjatovic/iStock(LONDON) — Two victims were killed and three others are in the hospital after a stabbing attack near the London Bridge Friday afternoon, authorities said.The stabbing has been deemed a terrorist incident, police said.One male suspect was shot by police and died at the scene, according to authorities, who added that a device believed to be a hoax explosive was strapped to the suspect.Police were called to the scene at 1:58 p.m. local time. The suspect was confronted five minutes later, police said.Tor Caldwell and Patrick Brown, who were on a bus on the bridge at the time of the attack, “saw some commotion out the side of the bus” and heard gunshots, Brown told ABC News.”People on the street were running,” Caldwell said.A police officer evacuated the bus passengers and told them to run, Caldwell said.”It was pretty scary because we didn’t know what was going on,” Brown said.Authorities are working to determine a motive and if any other suspects were involved, Metropolitan Police Commissioner Cressida Dick said.London’s Metropolitan Police Service said it’s “enhancing police patrols” in the city in the wake of the attack.”We urge the public to remain calm, but be alert and vigilant,” police officials tweeted.Prime Minister Boris Johnson called the attack “appalling,” tweeting, “All my thoughts are with the victims and their families.”

I want to thank the emergency services and members of the public for their immense bravery in responding to this suspected terrorist attack at London Bridge. This is an appalling incident and all my thoughts are with the victims and their families.

Johnson told reporters, “I can assure you that anyone involved in this attack will be hunted down and brought to justice.”London Mayor Sadiq Khan said the city would “stay resolute in our determination to stand strong and united in the face of terror.”In June 2017, eight were killed when a group of attackers plowed a van into people on London Bridge and then drove to nearby Borough Market and stabbed several others.