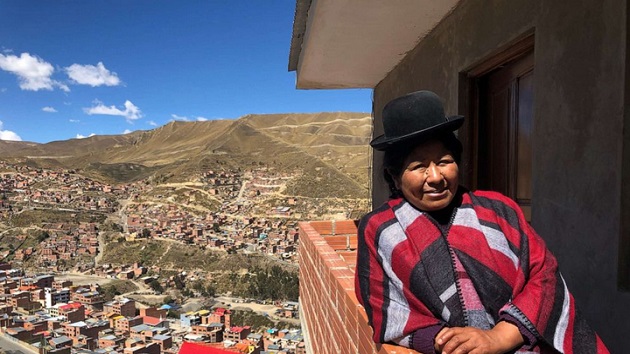 Sarah Hucal/ABC News(LA PAZ, Bolivia) — Polonia Ana Choque Silvestre, better known by her stage name of Carmen Rosa, was one of Bolivia’s first female wrestlers.At 49, she is a grandmother and unlike many scantily clad American female wrestlers, she competed in a pleated skirt, shawl and bowler hat with pigtail braids — the signature outfit of “cholitas” — indigenous Aymara and Quecha women who wear the signature cholita outfit.Identifying as a cholita, she competed not just for sport, but for a cause — fighting against machismo culture and violence against women that has been rampant in her country.”Essentially the men didn’t want us to wrestle,” said Rosa, better known as La Campoena: The Champion. “And also the women like us, our Aymara sisters said ‘why? This sport is for men.’” About 20 years ago, women were initially incorporated into the wrestling shows as a side event, but were so popular that they became the main act. Now, three days a week in the city of El Alto, which overlooks Bolivia’s capital, La Paz, cholitas like Rosa battle it out in the ring in an event that’s a hit with locals and a top tourist attraction.On a Thursday evening in El Alto, Simpatica Angela, a young cholita in a large blue skirt and elegant blue top shouted at the crowd, demanding revenge. Moments earlier, her opponent, Vede Pepita had climbed up a post before flying through the air and body slamming her – with a sharp thud that reverberated through the room.Like WWE or Mexican wrestling (called lucha libre), it’s all part of the show; these women are trained performers, with the younger generation starting as early as age 15. Matches typically have a “good” and “bad” character who battle theatrically. “Show them what women can do”In her modest home, Rosa wistfully thumbs through newspaper and magazine clippings of her coverage over the years, features in National Geographic, German newspaper Die Zeit, awards won for a documentary about her story, among others.As a child, she attended wrestling matches with her parents and developed her love of the art, but she never thought she would be in the ring, let alone Bolivia’s reigning champion. Although already a mother of two, she began to train.When wrestling promoter Juan Mamani announced men and women would train together, there was a lot of resistance. “The men, the wrestlers said, ‘Ah what is the use of these women, they’re for the kitchen and nothing more, with their pollera – what are they going to do?’ And I believe it was these words that pushed Carmen Rosa” in 2001, she recalled.“I said to myself, show them what you can do, show them that women can do it. Since then, Carmen Rosa has performed all over the world, in the US, England, Argentina, and beyond,” she added.While it may look like fun and games, by simply performing in the ring, these women are fighting against stereotypes of gender, race and class.Machismo culture is entrenched in Bolivia, and violence against women is widespread. Seven in 10 Bolivian women reported having experienced some form of violence, according to Bolivia’s National Statistics institute.In July, Bolivia’s government declared gender killings a national priority as the number of femicides– the killing of a woman by a man – in the first half of 2019 was the equivalent of one woman being killed every two days. Half of the violent acts take place in indigenous communities, according to 2017 figures from the government. After their show on Sundays, cholita wrestlers teach self-defense moves to local women who attend the matches.Cholita wrestling emphasizes resistance to the violence surrounding them and fights against gender stereotypes, as well as discrimination that indigenous women in Bolivia have long faced.Seen merely as poor migrants who moved to the cities, for years, cholitas and other indigenous women were treated as second-class citizens, even banned from certain public places. The word cholita comes from the pejorative Spanish term for an indigenous person “chola,” and has since been reclaimed and used proudly by younger generations.“There has been a lot of empowerment for cholitas in La Paz,” explained Denys Sanjines, organizer of Cholitas Wrestling, part of the Bolivian Wrestling Association. “30 years ago, these ladies only two roles in society: to be housekeepers or ladies selling things on the streets. But with a revolution of culture and a new generation of open mindedness in Bolivia, now we have cholita politicians, cholita journalists, cholita mountain guides and everything.”Although 65% of Bolivians identify with an ethnic group, indigenous citizens have faced repeated discrimination and did not gain the right to vote until 1952. Today, the situation is different. “We are very proud of our culture and we love to show it, even young people, and this is not fading out” said Daniel Cuevas, an Aymara tour guide with Red Cap Walking Tours who brings his clients to the show every week. Cuevas thinks the election of Bolivia’s first indigenous president, Evo Morales, in 2005 has a lot to do with it.Despite being retired, Carmen Rosa uses her local celebrity as a political activist and has been speaking out against the violence of the recent weeks.Yet, wrestling will always be her true passion. She says it has opened up doors for her – and helped elevate the status of women in her country. “Carmen Rosa is a fighter in the ring, but all women are fighters outside of the ring,” she says “we fight in our daily lives, to bring our children forward, to take one push forward; we are always fighting.”Copyright © 2019, ABC Radio. All rights reserved.