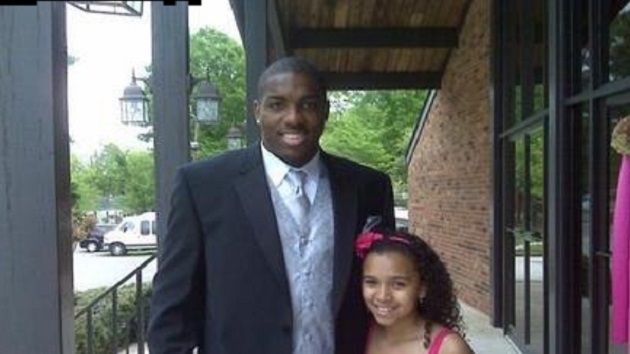 Instagram/@thebigticket205(MONTGOMERY, Alabama) — UFC fighter Walt Harris is opening up about the “unbearable” pain of losing his stepdaughter, 19-year-old Aniah Blanchard, whose remains were found one month after she vanished.”Right now nothing makes sense and I’m so lost,” Harris wrote on Instagram. “I just want you back.”Blanchard, an Alabama college student, was last seen at a convenience store in Auburn on Oct. 23. Her car was found Oct. 25 near an apartment complex in Montgomery, about 50 miles away from the convenience store.After a month-long search, including rewards offered from Harris’ UFC colleagues, Blanchard was found dead on Monday in Macon County, Alabama. Her death is being investigated as a homicide.Harris wrote on Instagram on Thursday, “My sweet baby girl… I just wanna thank you for helping me change my life for the better.””For teaching me how to be a man and a better father! For being my biggest fan win, lose, or draw! For always knowing what to say to put a smile on my face and lift me up when I was down and wanted to give up,” Harris wrote. “You light up my world I’m so many ways.””I hope I made you proud,” he said. I’m gonna keep going daddy just needs time. I love you so much. Look after us like you always did. We need you now more than ever. My lil mighty mighty tiger is a angel now. I love you baby girl forever and ever!”Three people have been charged in Blanchard’s disappearance.Ibraheem Yazeed was arrested on Nov. 7 in Florida and was charged with kidnapping in the first degree, a designation that includes the intent to inflict physical injury. Surveillance video from inside the Auburn convenience store showed both Yazeed and Blanchard inside at the same time, and a witness outside the store said he saw Yazeed force her into her car, according to an arrest affidavit.Antwain Fisher was arrested last week and charged with first-degree kidnapping. He is accused of “providing transportation to Yazeed, and disposing of evidence,” according to a charging affidavit.David Johnson Jr. was charged on Monday with hindering prosecution. Yazeed was allegedly at Johnson Jr.’s home before he left for Florida, ABC Birmingham affiliate WBMA reported, citing court documents. Authorities allege Johnson Jr. knew that Yazeed was wanted by police at the time.Upgraded charges are expected after the medical examiner determines Blanchard’s cause and manner of death, police said.

Daughter of ‘hero’ Uvalde teacher: ‘I know she didn’t even hesitate’ to shield students