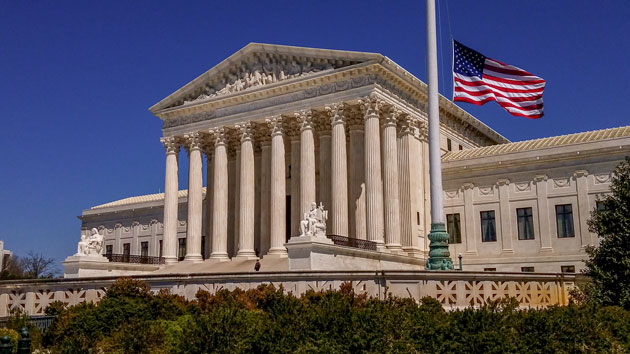 iStock(NEW YORK) — For the first time in nearly a decade, the U.S. Supreme Court on Monday will consider Second Amendment rights in a closely watched case that gun safety advocates worry could set a dangerous new precedent.The case involves a New York City law that prohibited licensed gun owners from taking their handguns to shooting competitions, gun ranges and second homes outside city limits. A federal appeals court upheld the regulation last year.But after the Supreme Court agreed to hear gun owners’ appeal, the city abruptly reversed course, voluntarily dropping the law, apparently fearing an expansive opinion from the court’s conservative majority.New York State went further, passing a law to ensure licensed gun owners can take their weapons to any location they’re lawfully allowed to have one.”This is a case the Supreme Court should not be ruling on and certainly should not be making a Second Amendment decision that goes beyond this New York City ordinance,” said Jonathan Lowy, chief counsel at Brady, a gun safety group. “It should not be ruling on this case because New York City has repealed the ordinance.”Numerous gun safety groups, concerned about a decision threatening a multitude of gun restrictions enacted by states around the country in recent years, joined the city and state in asking the court to dismiss the case as moot.But it declined.”The City of New York did not respect its citizens’ Second Amendment rights before the Supreme Court granted review in this case and it will not respect them going forward,” said Chris Cox, executive director of the National Rifle Association’s Institute for Legislative Action. “We are confident that the Court will reject New York’s desperate attempt to avoid review of its blatantly unconstitutional laws.”The justices will consider the mootness question during oral arguments on Monday but will also likely debate the merits of the case.”I think they are going to be really mad,” said Tom Goldstein, a constitutional lawyer and founder of SCOTUSblog, said of the justices. “You can’t just evade judicial review. … In the end, they want to hold argument so they can yell at New York and vent a bit and write an opinion.””This case is significant not because the New York regulation will be struck down, which it will be, but what else it says,” Goldstein said.Gun rights supporters, including the NRA, hope the justices will use the opportunity to elaborate on a landmark 2008 Supreme Court decision affirming an individual right to keep and bear arms for self-defense. The court has not yet fully addressed the scope of that right or how to precisely determine what restrictions are allowed.”This is a great opportunity for the court to provide some clarity to the lower courts in this area,” said Elizabeth Slattery, a legal fellow with the conservative Heritage Foundation.There is a chance that the court could still dismiss the case after oral argument and also the prospect of a narrowly tailored opinion dealing just with the New York City law and ordinances like it.”A broad unfavorable ruling in this case would give the NRA an opening to use the courts to stop the gun safety progress that’s been made across the country,” said Hannah Shearer, litigation director at Giffords Law Center to Prevent Gun Violence.According to the Giffords center, legislators enacted a record 67 new gun safety laws across 26 states and Washington, D.C. in 2018. Of the 10 states with the strongest gun laws, according to the group, seven have the lowest gun death rates in the country.”What is particularly striking and significant is that the appellate courts around the country, and in decisions by judges appointed by both Republicans and Democrats, these courts have overwhelmingly found that these types of gun safety laws are consistent with the Second Amendment and American history and Supreme Court precedent,” said Eric Tirschwell, managing director of litigation and national enforcement policy at Everytown for Gun Safety.”It’s clear that the NRA is hoping that the Supreme Court will now step in and upset that consensus in favor of an approach that is extreme and dangerous and incorrect,” he said.More than 35,000 Americans were killed by guns so far this year, according to the Gun Violence Archive. Most of those — 21,000 — were death by suicide. There have been more than 380 mass shootings and 29 mass murders, the ground found for 2019.Copyright © 2019, ABC Audio. All rights reserved.