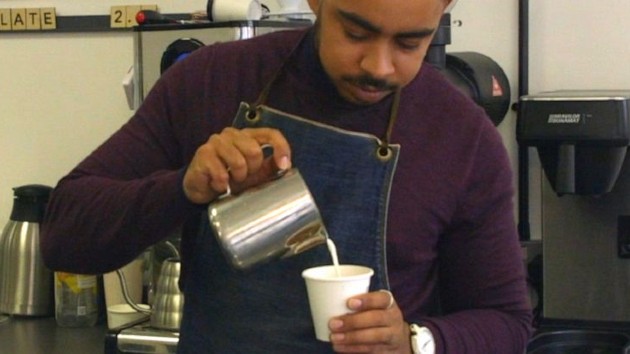 Lesley Hauler/ABC News(LONDON) — “Everyone deserves a second chance” — and a London coffee shop is doing just that. Second Shot serves up high-quality coffee with a side of compassion by employing people who’ve been affected by homelessness.”What we do is kind of breaking down the barrier and the perception of what homelessness is, because you see people walk into Second Shot and interacting in a way that you don’t really see elsewhere,” founder Julius Ibrahim told ABC News’ Good Morning America. Ibrahim opened Second Shot in May 2016 in Bethnal Green after dropping out of college and crowdfunding the business online.Customers can choose to “pay it forward” by donating money in the store or online, which then would pay for a coffee or a meal for someone on the street. Ibrahim estimates that patrons have gifted around 20,000 “pay it forwards” to the homeless community. He believes the shop’s success has to do with the generosity of the community and the quality of his product. He opened a second location in Marylebone, London, this past summer.”When I first opened,” Ibrahim added, “I wanted to make sure we weren’t just a typical ‘charity coffee shop.’ It’s really important that it’s not just about the social impact but that the customer is also getting some of the best coffee in Europe.”Second Shot partners with local charities to recruit people who have been affected by homelessness and to help them transition into long-term employment.”You don’t know if the person serving you is someone who has been working in specialty coffee for years or somebody who is just starting their journey again,” Ibrahim said.”It’s just making people realize that we’re all just one paycheck away from being on the streets,” added Ecevit Tahsin, who’s struggled with homelessness and said he wished a place like Second Shot was around to help him when he was at his lowest. “I was in a situation where I was living on the streets. I was also on substance misuse — I’ve done a lot of things,” Tahsin told GMA.He found stability with Second Shot as an assistant barista and has been working with Ibrahim for the past 3 1/2 years. Now he’s eager to help “pay it forward” to others. “I see people every day that know that I have been homeless, know that I have suffered what I’ve suffered, and know that I’m on the other side of the grass and that I’m trying to pull people with me,” Tahsin said. “And what better way to do it than in this coffee shop showing people love?” Copyright © 2019, ABC Audio. All rights reserved.

Teachers can score free coffee all September at this popular chain

Twitter is bringing podcasts to its platform in new design