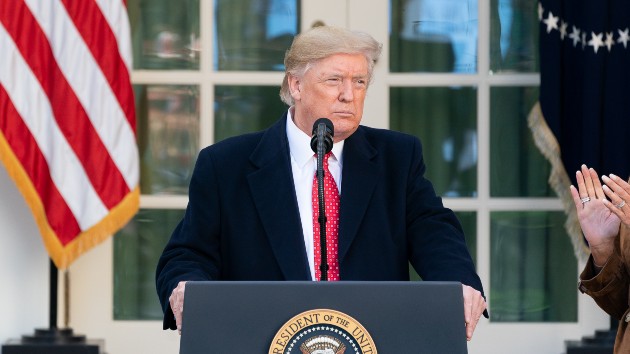 Official White House Photo by Andrea Hanks(WASHINGTON) — A new report by House Republicans reviewed by ABC News on Monday argues that President Donald Trump shouldn’t be impeached because there is no evidence that his actions were done specifically to “benefit in the 2020 election.” The 123-page report is the official GOP response after several weeks of closed-door and public testimony that detailed Trump’s efforts to pressure Ukraine’s new president, Volodymyr Zelenskiy, to announce an investigation that included Democrat Joe Biden and his son, Hunter. Several witnesses testified that the White House dangled a presidential summit in exchange for the probe, and that Trump froze nearly $400 million in much-needed security assistance just days before calling Zelenskiy and asking for a “favor,” including an investigation into the Bidens.Republicans countered the testimony and text exchanges obtained by Democrats as “hearsay, presumption and emotion.” They also argued that Democrats are pursuing impeachment as a “tool for settling political scores and re-litigating election results with which they disagreed.” And they say the witnesses never produced clear evidence that Trump was doing it to sway the 2020 election, rather than addressing “genuine concerns” about corruption in Ukraine.“The evidence presented in this report does not support a finding that President Trump pressured President Zelenskiy to investigate his political rival for the President’s benefit in the 2020 election,” the Republican report states.“The Democrats’ impeachment narrative ignores the President’s state of mind,” the assessment later adds.Democrats will no doubt take issue with the findings. Whereas Republicans argue in the new report that the transcript of Trump’s call doesn’t show “conditionality, pressure or coercion,” witnesses testified that such pressure was implied because Ukraine was a vulnerable democracy still fighting Russia at its border and desperate for U.S. support.Witnesses also called into question the president’s insistence that he was genuinely focused on corruption and not domestic politics. Ambassador Gordon Sondland, a Trump megadonor, testified that the White House only wanted Ukraine to announce an investigation that included Hunter Biden’s involvement in the Ukraine gas company, Burisma, and that he didn’t think it was necessary for Ukraine to conduct the probe.Former National Security Council aide Fiona Hill called this push a “domestic political errand.” And she directly disputed Trump’s theory that Ukraine — not Russia — meddled in the 2016 election, calling it a “fictional narrative” pushed by Russian security services.In the Republican report, they insist there is “compelling and indisputable evidence that Ukrainian officials” sought to influence the election in favor of Democrat Hilary Clinton. While some Ukrainian politicians did support Hillary Clinton over Trump, U.S. intelligence and a bipartisan Senate inquiry found the primary culprit behind election interference was Russia, which engaged in a widespread, invasive and secretive campaign to sway voters in support of Trump.Republicans also argued there was no evidence of “bribery” or “extortion.”“The evidence presented does not prove any of these Democrat allegations, and none of the Democrats’ witnesses testified to having evidence of bribery, extortion, or any high crime or misdemeanor,” the report states.The Republicans add that Trump is accountable to voters and that Americans will decide whether he acted in their best interests come 2020.”The accountability to the American people comes at the ballot box, not in House Democrats’ star chamber,” they stated. Copyright © 2019, ABC Audio. All rights reserved.