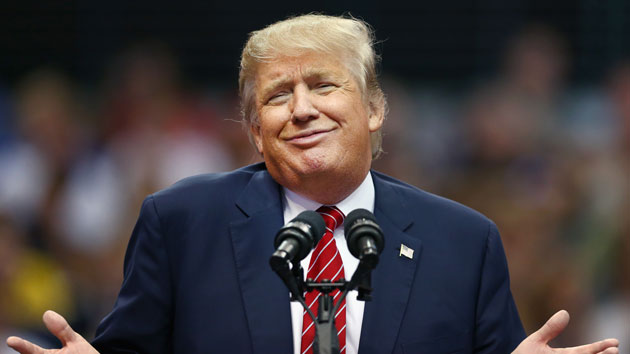 Tom Pennington/Getty Images(WASHINGTON) — House Intelligence Committee Chairman Adam Schiff on Tuesday released a sweeping new report on behalf of Democrats that lays out their case for the impeachment of President Donald Trump, calling it a “wrenching time for the nation” but insisting that nothing less than American democracy is at stake.At a news conference shortly afterward Schiff said, “The president was willing to sacrifice the national security of the United States … in order to get what he wanted.”Asking rhetorically “What does this means for Americans? Why should they care?” Schiff said, “This is not about Ukraine. This is about our national security,” saying, “Americans should care deeply that the president is betraying their trust in him.””We should care about this. We must care about this,” Schiff said, saying that if not, Trump would be “back at it again.”The report, which can be read here, directly accuses the president of a “scheme” that leveraged his power in office for his own personal and political gain. Democrats allege there is enough evidence from witness testimony and documents to find that Trump conditioned a White House meeting, as well as nearly $400 million in military aid, on Ukraine’s willingness to launch an investigation that included Trump’s 2020 political rival Joe Biden.The approximately 300-page report also accuses the president of obstructing the impeachment inquiry by telling witnesses to ignore subpoenas for documents and testimony. Several of those witnesses defied those demands and testified anyway.“The President engaged in this course of conduct for the benefit of his own presidential reelection, to harm the election prospects of a political rival, and to influence our nation’s upcoming presidential election to his advantage,” Schiff, D-Calif., states in a preface to the report. “In doing so, the President placed his own personal and political interests above the national interests of the United States, sought to undermine the integrity of the U.S. presidential election process, and endangered U.S. national security.”Schiff said the president and his supporters have attacked “the very idea of fact and truth.”“America remains the beacon of democracy and opportunity for freedom-loving people around the world … What we do will determine what they see, and whether America remains a nation committed to the rule of law,” he wrote.While the report makes no explicit recommendation for possible articles of impeachment, it offers a detailed roadmap that the House Judiciary Committee is expected to use to write them. The report details the president’s actions to leverage Ukraine’s President Volodymyr Zelenskiy with the help of his close advisers — specifically naming acting White House chief of staff Mick Mulvaney, Secretary of State Mike Pompeo, former Energy Secretary Rick Perry, along with other administration officials.The report accuses the president of undermining U.S. national security interests and U.S. policy as it relates to Ukraine. It is divided into two sections — one focused on the substance of the allegations detailing the president’s alleged abuse of power and the second section outlines the obstruction of the impeachment inquiry, focusing on witness intimidation and blocking witness testimony.The report was released while Trump was attending a NATO summit in London, but the White House was ready with a dismissive response.”At the end of a one-sided sham process, Chairman Schiff and the Democrats utterly failed to produce any evidence of wrongdoing by President Trump. This report reflects nothing more than their frustrations. Chairman Schiff’s report reads like the ramblings of a basement blogger straining to prove something when there is evidence of nothing,” White House press secretary Stephanie Grisham said in a statement.Republicans on the House Intelligence Committee released their own report Monday evening which refutes many of the findings laid out by the Democrats.That 123-page GOP report argues that Trump should not be impeached because there is no evidence that his actions were done specifically to “benefit in the 2020 election.”Republicans will have until Thursday to reply to the report voted on Tuesday with their own remarks that will also be passed along to the House Judiciary Committee.Once the Judiciary Committee has had time to consider the report and conduct their own hearings, the first of which is scheduled for Wednesday, they’ll determine whether or not to propose articles of impeachment.A joint statement on that point from Schiff and fellow Democrats — Foreign Affairs Committee Chairman Eliot Engel and House Oversight Chairwoman Carolyn Maloney– read: “It will be up to the Congress to determine whether these acts rise to the level of an impeachable offense, whether the President shall be held to account, and whether we as a nation are committed to the rule of law—or, instead, whether a president who uses the power of his office to coerce foreign interference in a U.S. election is something that Americans must simply ‘get over.’“With the release of our report, the American people can review for themselves the evidence detailing President Trump’s betrayal of the public trust.”A whistleblower report which alleged that Trump had dangled a White House meeting and military aid to Ukraine in exchange for Ukrainian officials opening an investigation into Joe Biden and his son, Hunter, on a July call with Ukrainian President Volodymyr Zelenskiy launched the House impeachment investigation earlier this year.It’s been almost nine weeks since members of the House Intelligence Committee began hearing from witnesses as part of the impeachment investigation.The committee publicly interviewed 12 officials over the two weeks leading up to the Thanksgiving recess. Those hearings followed almost six weeks of closed door depositions with 17 individuals.During both public and closed door hearings, officials interviewed consistently testified that they believed a meeting between Trump and Zelenskiy was contingent upon Zelenskiy making an announcement of plans to investigate Biden.This is a claim that Trump and other White House officials have denied.Copyright © 2019, ABC Audio. All rights reserved.