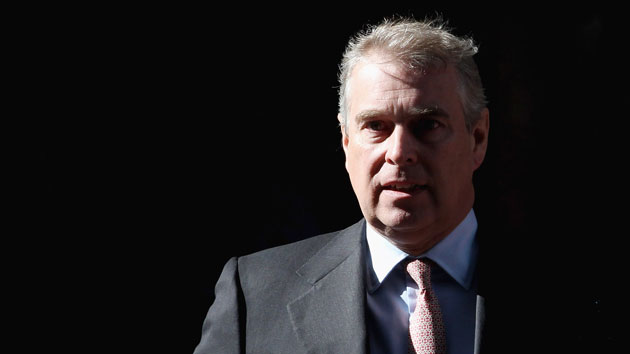 Dan Kitwood/Getty Images(LONDON) — This is the interview Buckingham Palace has been dreading: Virginia Roberts Giuffre speaking out about Prince Andrew, in her first TV interview with British media on Monday.“I’d just been abused by a member of the royal family,” she told BBC’s “Panorama.” “These powerful people were my chains.”Giuffre alleges financier and convicted sex offender Jeffrey Epstein and his former girlfriend Ghislaine Maxwell directed her to have sex with Queen Elizabeth’s son in 2001 when Giuffre was only 17.“I implore the people in the U.K. to stand up beside me, to help me fight this fight, to not accept this as being ok,” Giuffre said. “This is not some sordid sex story. This is a story of being trafficked, this is a story of abuse and this is a story of your guys’ royalty.”Prince Andrew has denied all her claims. In a BBC interview from November, he maintains he has no recollection of Giuffre and never had sex with her.“I can absolutely categorically tell you it never happened,” he told BBC’s “Newsnight.”The interview was widely viewed as a disaster for Prince Andrew and the Palace.The fallout was swift and brutal for Prince Andrew, who’s eighth in line to the British throne. He had to step back from royal duties and reportedly moved his offices out of Buckingham Palace.“The events in the last two weeks, he has paid essentially the ultimate price professionally,” Victoria Murphy, ABC News royal contributor, explained. “He’s had to step back from his public duties. He’s lost his public role, they’re saying for the foreseeable future. … I find it hard to see how he can come back from this now.”Once known in British circles as the “Party Prince,” now he’s become a pariah.Prince Andrew’s ill-fated friendship with Epstein began in 1999 when Maxwell, an old friend of the prince, introduced them.“He had the most extraordinary ability to bring extraordinary people together, and that’s the bit that I remember as going to the dinner parties where you would meet academics, politicians, people from the United Nations,” Prince Andrew said of Epstein on “Newsnight.”Prince Andrew stayed with Epstein at his properties in New York, Palm Beach and at Epstein’s private island in the Caribbean. He also flew on Epstein’s private jet.The two remained friends even after Epstein pleaded guilty in 2008 to two felony prostitution charges after being investigated by local police and the FBI for allegedly abusing more than 30 underage girls. Epstein was not formally accused of this abuse by authorities at the time.As part of his plea, Epstein served just 13 months in a county jail and registered as a sex offender. Earlier this year, Epstein was charged in New York Federal Court with child sex-trafficking and conspiracy. He died of an apparent suicide in jail in August, while awaiting trial.The Prince has said he never witnessed any of the criminal conduct that Epstein was convicted or accused of.But Giuffre claims that Epstein and Maxwell were the ones who set her up with Prince Andrew at a club called Tramp in London.“In the car, Ghislaine tells me I have to do for Andrew what I have to do for Jeffrey. I just didn’t expect it from royalty. I didn’t expect it from someone people look up to and admire,” she said.“Then he asked me to dance … this guy was sweating all over me,” Giuffre said. “I was just like grossed out from it, but I knew I had to keep him happy, because that’s what Jeffrey and Ghislaine would have expected from me.”She alleges that Maxwell recruited her when she was 16 and groomed her to become Epstein’s teenage sex slave.In court filings in a defamation case against Maxwell, Giuffre claims Epstein ordered her to have sex with some of his powerful friends – including, on three occasions, Prince Andrew – in London, at Epstein’s home in New York and on Epstein’s private Caribbean island.Maxwell is not facing any criminal charges in this case and has insisted all of Giuffre’s allegations, including those about Prince Andrew, are false.In a statement in response to BBC’s “Panorama,” Buckingham Palace said the Duke “unequivocally regrets his ill-judged association with Jeffrey Epstein” and “deeply sympathizes with those affected who want some form of closure.”“It is emphatically denied that the Duke of York had any form of sexual contact or relationship with Virginia Roberts. Any claim to the contrary is false and without foundation,” the Palace added.Giuffre, whose maiden name is Roberts, is now a 35-year-old mother. She says the picture of her and Prince Andrew together backs up her account of what happened.“Nobody can prove whether or not that photograph has been doctored,” Prince Andrew told “Newsnight.”“The people on the inside are going to keep coming up with these ridiculous excuses. Like his arm was elongated or the photo was doctored,” Giuffre said on “Panorama.” “I’m calling b.s. on this. … He knows what happened. I know what happened, and there’s only one of us telling the truth, and I know that’s me.”