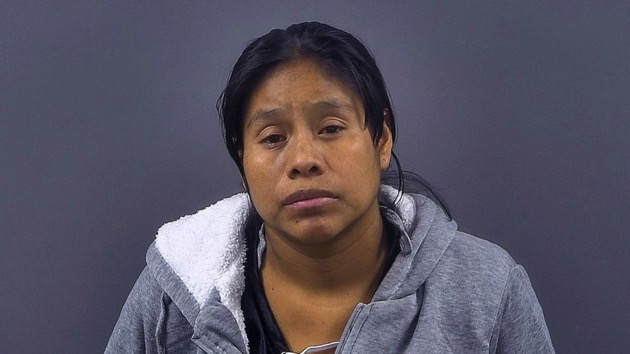 Maria Domingo Perez arrested for allegedly taking part in a scheme to buy and sell an infant. (Warren County Regional Jail)(BOWLING GREEN, Ky.) — Three people in Kentucky were arrested for allegedly buying and selling a months-old baby, police said.The infant’s mother, Maria Domingo-Perez, 31, sold her child to a couple she did not know for $2,000, according to a statement from the Bowling Green Police Department on Tuesday.Police learned of the exchange after officials at Parker Bennett Curry Elementary School received information about that child was no longer in its home, Officer Ronnie Ward told ABC News in a telephone interview on Wednesday.Ward said that a staff member at the school had been keeping an eye on the family after concerns were raised about the welfare of her five children, including the baby that was allegedly sold.A motive is unknown at this time.Domingo-Perez did not have any relationship with the couple prior to selling her child to them, according to Ward.When Domingo-Perez was confronted by police, she allegedly gave “conflicting statements” before telling police she did sell her infant to Pascual Jose Manuel, 45, and Catarina Felipe Jose, 37, authorities said.All three were charged with selling/purchasing a child for adoption, which is a felony, according to police.The elementary school declined to comment on the case and directed ABC News to police.The child, who was born in October, was taken in by Social Services along with Domingo-Perez’s four other children, according to police.Domingo-Perez, Manuel and Jose are all being held at the Warren County Regional Jail on $10,000 cash bond, online records show.Copyright © 2019, ABC Audio. All rights reserved.