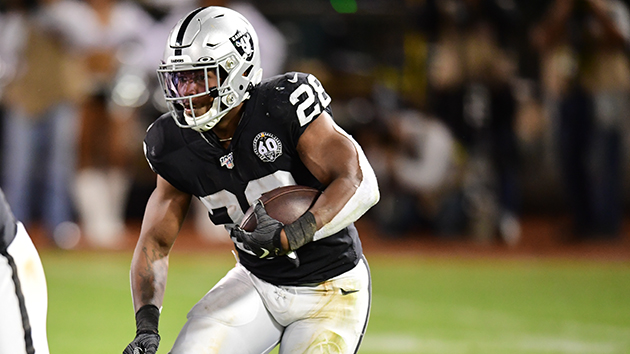 Photo by Scott Clarke / ESPN Images(OAKLAND, Calif.) — Oakland Raiders rookie running back Josh Jacobs has been playing through a fractured shoulder for the better part of two months, he revealed on Wednesday.Jacobs is fourth in the NFL in rushing yards, with 1,061, posted on Snapchat that since Week Seven, “I just play on it.”He initially suffered the injury during a play in the team’s October 20th game against the Green Bay Packers. He left that game and received a pain-killing injection before returning. Jacobs has not missed a game since, though ESPN reports his workload has been monitored and managed since.

“Josh is special,” quarterback Derek Carr said Wednesday. “If Josh wasn’t able to play, I would completely understand, with what he’s dealing with. But the fact that he keeps suiting up and going out there and not only running, but running with the style that he runs with, I don’t think enough can be said about that guy.””He’s tough, man, he’s tough,” Raiders head coach Jon Gruden said Wednesday. “Jacobs was the team’s first-round draft pick — 24th overall — in April’s NFL Draft. Copyright © 2019, ABC Audio. All rights reserved.

Novak Djokovic could be barred from playing in French Open