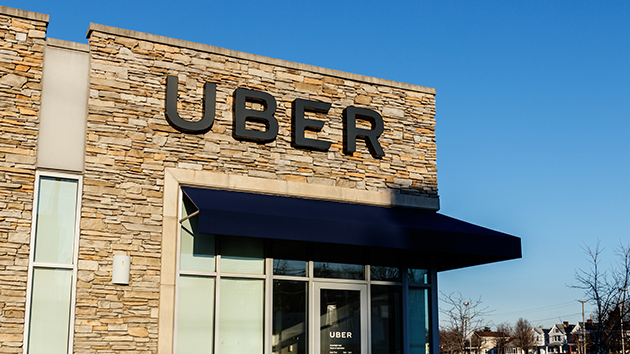 jetcityimage/iStock(NEW YORK) — A viral tweet reveals an Uber business place in Rhode Island had separate bathrooms for employees and drivers, at a time when tensions between the two groups at the ride-share company are already running high.”I’ve just always wondered why Uber viewed us as two separate classes,” Erika Betts, who snapped the photo and shared it on Twitter, told ABC News Thursday.”These signs are commercially made, somebody made them, somebody ordered them, somebody paid for them,” she added.Betts, 28, said she has been an Uber driver for over two years and was at the Uber Greenlight Hub office in Providence seeking help after finding out via a notification that her account had been deactivated after she says a passenger complained about a surge fare.”I was waiting to be seen by a representative and I was just noticing the bathroom signs on the door,” she said. “It’s always made me a little uncomfortable, I’m not sure what prompted me to tweet about it now.”Even if drivers wanted to use the employee restroom, Betts says it was always locked and “you need a key to get in there.”Uber responded to ABC News’ request for comment by pointing to a response to Bett’s tweet from Andrew Macdonald, a senior vice president at the company, who said he “looked into this.””This is not our policy and it’s absolutely unacceptable,” Macdonald wrote. “The signs are coming down today.”Macdonald added in a follow-up tweet that the “bathroom was also being used for employee storage, but that’s not an excuse. I don’t believe this is the case anywhere else (and it’s certainly not our design policy) but we’re doing a full review now.”An Uber spokesperson told ABC News Thursday that the Providence Greenlight Hub was the only location with this signage and that the signs have been taken down.The signs still sparked outrage on social media, and even caught the eye of a lawmaker.New York congresswoman Alexandria Ocasio-Cortez, tweeted a link to a news story of the separate bathrooms at the Providence office.”Siri, show me what classicism looks like,” she wrote.In September, California passed a bill that would extend new protections to employees of so-called “gig economy” companies including Lyft and Uber, essentially forcing companies to recognize formerly contract workers as employees.Uber said at the time that the California bill, which is set to go into effect in January, “does not automatically reclassify any rideshare drivers from independent contractors to employees” and that it will “respond to claims of misclassification in arbitration and in court as necessary.”Copyright © 2019, ABC Audio. All rights reserved.