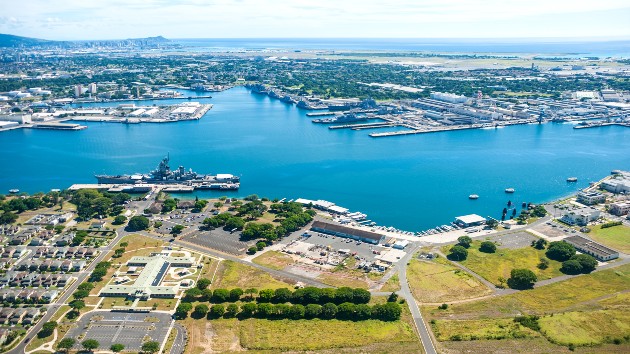 sphraner/iStock(HONOLULU) — A 22-year-old active-duty sailor opened fire on three civilian employees, killing two, before he fatally shot himself at the Pearl Harbor Naval Shipyard near Honolulu on Wednesday, a military official said.The suspected shooter was identified as 22-year-old G. Romero. He opened fire on shipyard personnel with his M4 service rifle and then used his M9 service pistol to shoot himself, the official said.Three civilian Department of Defense workers were found shot in the vicinity of the base’s Dry Dock 2. Two died and a third is in the hospital in stable condition, according to Rear Adm. Robert Chadwick, commander, Navy Region Hawaii.The incident occurred around 2:30 p.m. local time, according to Joint Base Pearl Harbor-Hickam officials.A motive for the shooting is not yet known.The sailor served on the USS Columbia, a submarine stationed at Pearl Harbor, Chadwick said.

The shipyard commander, Capt. Greg Burton, said in a statement, “No words will convey the full measure of sorrow from today’s tragedy. This loss will be felt throughout our shipyard ‘Ohana, greater shipyard & NAVSEA family, submarine force, and the Navy as a whole.””For any who have worked alongside those lost today, please reach out to your chain of command and let them know so that we can facilitate time for you to begin to process this tragedy,” Burton said. “As we mourn the loss of members of our ‘Ohana, please take the opportunity to reconnect with each other and to reinforce and strengthen the bonds with each other. We value each one of you deeply and we are here for you.”An official said an investigation was still being done as to the nature of the gun involved in the shooting. Personal weapons are not allowed on base.Honolulu EMS sent multiple ambulances to the scene, and Honolulu Fire responded with six units, including almost two dozen firefighters.Lockdown on the base was lifted at about 4 p.m. local time on Wednesday.Base security and the Naval Criminal Investigative Service are currently investigating. The names will not be released until next of kin have been notified.”While the investigation into this incident continues, my thoughts and aloha are with the victims of the terrible tragedy at Joint Base Pearl Harbor-Hickam and with their families,” Hawaiian Sen. Mazie Hirono said in a statement. “I join all of Hawaii in expressing our gratitude to the first responders who rush toward danger every day to keep us safe.”